Fearless Females - Continued From Day One

..Continued from Day One - Favorite Female Ancestor ...
Do you have a favorite female ancestor? One you are drawn to or want to learn more about? Write down some key facts you have already learned or what you would like to learn and outline your goals and potential sources you plan to check.

I meant to do this yesterday, but things just didn't go the way I planned.

Mary Edwards White Cannon married for the third and final time, Charles Barber Taylor December 27, 1847 in St. Louis, Missouri. He then took the role of father to 2 year old Elizabeth. In 1849 they had son Charles Edwards Taylor. The family of four traveled west with the Pioneers in 1850.

It was in April of 1865 on board the ship Belle Wood on his return from a 3 year mission in England that Charles met Martha Burrows. From various accounts of this passage, these two apparently shared a whirl wind romance. Now this didn't sit too well with me when I learned of it. His wife and children have been patiently awaiting his arrival back home to Utah and what does he do? He brings another woman home and marries her in polygamy! Charles and Martha were married 1866 in Salt Lake City, Utah.

I have seen other accounts of this romance somewhere, but I can't seem to find them now.


Charles filed for divorce April 30, 1885 complaining that "Mary acquired the habit of drinking intoxicating liquors about the year 1860."  He stated that "the habit grew upon her so that for his own welfare and happiness he separated himself from her in the year 1866 and has not lived with her in the marrital relations since." Gee, 1866 -- that's when he took his second wife. Go figure.

There's something about this whole divorce that seems strange.  Why wait 25 years to get a divorce?  Why bother getting divorced at all, just stay at your other wife's house. I find it hard to believe that Mary was an "habitual drunkard".

Here is my theory: Charles Taylor had money and other assets. It is my opinion after reading several articles about second wife Martha B. Taylor and law suits regarding his estate, that he filed the divorce so Martha would be recognized as the legal wife. I believe he did so with pressure from her.  Mary never contested the divorce.

Mary was a strong, loving, and happy woman.  I can sense this just by looking at her photo.  She was also very talented.  Below is a sample of her beautiful needle work. 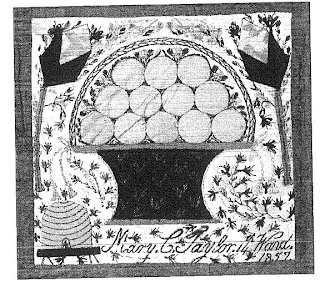 One of the goals I have is learning more about her ancestry, which is kind of hard since her father never spoke to her again after she joined the Mormon Church and left England.

Her tombstone reads: A Devoted Mother, A Friend to the Poor, May she rest in peace.