Last weekend we rode the trike down to Daytona for Bike Week. We always stay with cousin John in Palm Coast when we go down.  Cousin John is actually hubby's father's first cousin which makes them first cousins once removed. When we first met him back in 2003 I was explaining to hubby how they were related and one of the sisters said, "You can't be removed from an Italian family!" I will never forget that, I thought it was funny.

Anyway, Cousin John and his wife Denise have become interested in their family history so her and I spent quite a few hours on Ancestry looking through the passenger lists. Let me tell ya, it sure makes it a lot easier muddling through Italian passenger lists when you are with someone who is familiar with Italy!

So we found a passenger list for hubby's great-grandfather, Gieseppe Bernardo. It was indexed on Ancestry like this:


First of all folks, there is no such place as Sieania, Biels or Satania in Italy.  I don't know how the indexer got "Sieania" when it clearly says Siracusa on the image.  It took many searches and trying to read the handwriting to figure out the birthplace.  Cousin Denise finally figured out that it says Riesi. 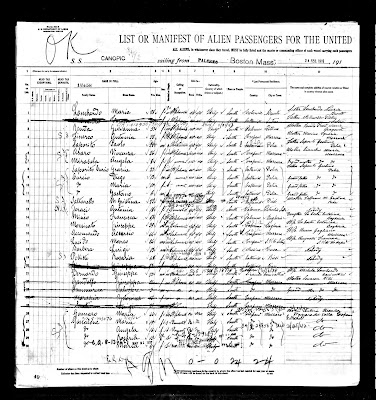 And it was only by accident that I discovered that there was a second page to this list. 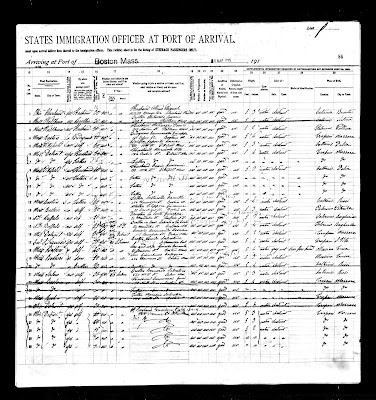 Another entry that drove us crazy trying to figure out is column 17 - Whether ever before  in the United States: and if so, when and where?  The entry read 909/913.  We finally figured out that it meant 1909-1913.  Why in the heck couldn't they put the 1 in front so we knew they were talking about years?!


So here is what we learned about great-grandpa  Bernardo from line 21 of this passenger list:


So the new discoveries we made from this list was that he had a brother named Salvatore, and that this was not his first trip to the U.S.  A couple of days ago I was finally able to find his first trip listed under Bennardo.


So for those of you who poke around on Ancesty.com and aren't familiar with passenger lists, don't forget to check the next page.