Is Washing Dishes a Delight? ~ Maybe for Miss Elizabeth Cannon 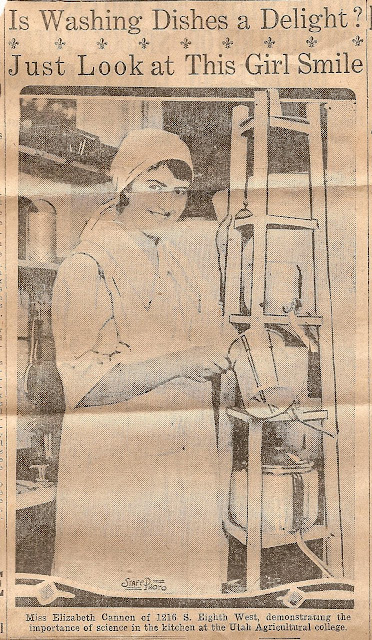 This is a cropping of a newspaper clipping tearing that was among the ephemera that grandma Hazel saved.  I had no idea who Miss Elizabeth Cannon was. I figured she was related some how, so I began a quest to figure out how.  It has been a chore.

It's more than likely that it was my great-great-grandmother Elizabeth Edwards Cannon Piggott who tore out the article from the newspaper.  She must not have had any scissors handy at that moment. And she really didn't even get the whole article. Looks like the picture was the main focus, especially with that silly headline.  She was probably laughing inside at the idea that Miss Elizabeth enjoyed doing dishes. 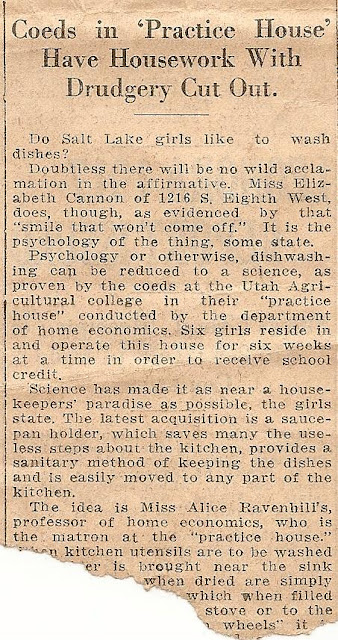 I can't be certain which newspaper this came from or the date it was published, but I think it may be from the Provo Herald. I am estimating a publish date circa 1918. This is the only clue I have to go on:

Now come along with me on this electronic paper trail journey, if you dare.

Finding her in previous census records didn't come as easy.  I couldn't find any other record for an Elizabeth Cannon born 1899.  The only possibility I could find for 1900 and 1910 showed a birth date of 1894.

There's no way I could know for sure that this was the same Elizabeth. I could find nothing of her after 1930. So of course I turned to Google. I was able to find a few year book pictures of her as a faculty member at BYU.  My favorite one was from 1927.

I enjoyed looking through her yearbooks, but I still haven't confirmed her parentage at this point.

Next stop is Chronicling America in the hopes of finding a newspaper article connecting her to any family member. Luckily I found this little tidbit. 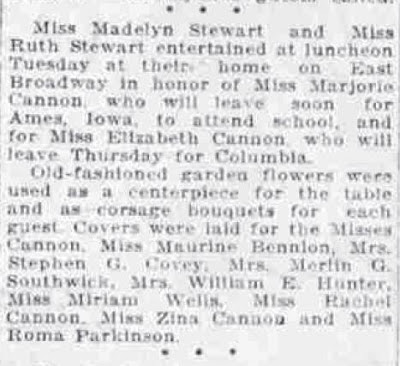 I then found the obituary for Marjorie Cannon which named her parents as Mary Alice Cannon and Lewis M. Cannon.  This also jives with the 1900 and 1910 census listed above.

From extensive Cannon research executed many years ago I knew that Lewis Mousley Cannon, was a son of Angus Munn Cannon; and Mary Alice Cannon, was a daughter of George Quayle Cannon. Yes, they were cousins.  Angus and George were brothers and my great-great-grandmother Elizabeth Edwards Cannon was their sister.


I discovered that Lewis and Mary had a daughter named Elizabeth Hoagland Cannon.  I needed to find a few more clues to make sure this is the same Elizabeth in my newspaper article.  So I ran a search on the name "Elizabeth Hoagland Cannon" and it brought me to this family tree which listed her husband as  Kiefer Branham Sauls. Things got a little easier after that.


I ran a search for Kiefer Sauls and found his biography. Now that I knew her married name I ran several searches on 'Elizabeth Cannon Sauls' and BINGO! I found another BYU yearbook page with her listed as Elizabeth Sauls.


Mrs. Elizabeth Sauls was one of the founding members of the sorority GAMMA PHI OMICRON. It was organized in 1926 to honor girls majoring in home economics.

I believe that I found enough information to confirm that this dish washing coed is none other than Elizabeth Hoagland Cannon Sauls. And how is she related, you ask? She is my great-great-grandmother's grandniece.  That makes her my 2nd cousin twice removed.


I was also glad to find that someone took a photo of her headstone and set up a profile on Find A Grave.  The contributor graciously transferred the profile to me so now I've got to go spruce it up.


Moral of this story - never give up and enjoy the journey!