While I was in Paris, Idaho I was able to leave the courthouse with copies of three documents. Today I want to share the marriage certificate of John T. Barker,Jr and Esther E. Henderson, my great-grandparents. 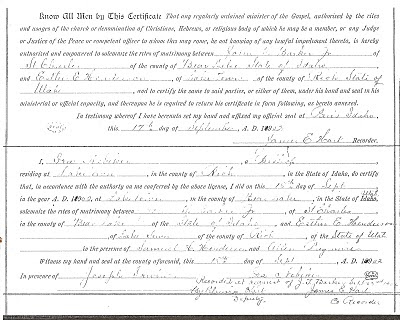 The handwriting is a little faint, but that's the best copy she could make.
The marriage certificate was applied for in Paris, Bear Lake, Idaho the 17th day of September 1902 and was recorded by James E. Hart.  The marriage ceremony was performed the 18th day of September 1902 by Bishop Ira Nebeker in Laketown, Rich, Utah and witnessed by Samuel Newton Henderson (father of the bride) and Allen Pugmire (cousin of the bride).

Among the photographs that I made copies of while I was in Idaho is this one of great-grandma and grandpa Barker on their 50th wedding anniversary. 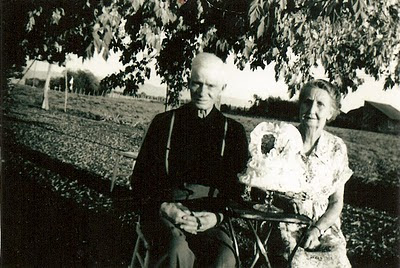 Right now I am in the process of transcribing a ten page (legal size) history of the Barker family written by my great-aunt Adelia.  When I have that done I will post it. 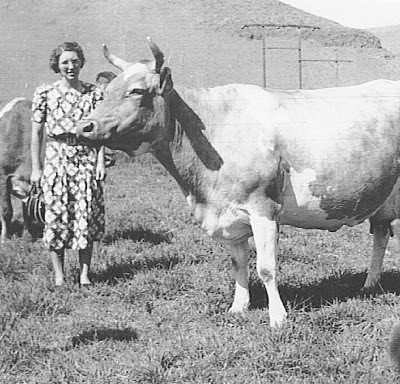 Posted by Leslie Ann at 8:40 AM No comments:

Ah -- it's good to be back home!  I had an awesome time visiting family and it was really hard to leave the grandkids.  They are so precious and they warm my heart so much!
I wish I could have spent more time in Bear Lake County.  I spent two days there, the first visiting with family. The next day we went through aunt Jean's pictures and we spent some time in the courthouse and cemetery hopping ( in the snow, mind you).  When I got back to mom's I discovered that I already had photos of half of the headstones that I was out in the snow taking pictures of stashed down stairs! Go figure.
While I was in Vegas visiting sister we got one of those phone calls that no one likes getting. Great aunt Rebecca passed May 14, and great uncle David (her brother) died the next day.

David Cannon Piggott 1923 ~ 2010 Our beloved father, grandfather, and great-grandfather, David Cannon Piggott, passed away at home May 15, 2010, in Bountiful, Utah.David was born in Glenco, Wyoming on January 20, 1923 to William C. and Hazel R. Piggott, the sixth of seven children. David's childhood coincided with the Great Depression. In order to make ends meet, he helped his father in the blacksmith shop. The large family lived in a sturdy, two-room, log home with no plumbing, a pump for water outside, and a path to the outhouse; it was crowded. He hitchhiked to Salt Lake City with a friend, determined to make something of his life. He began studies at LDS Business College before being drafted into the US Army in 1943. David was a decorated veteran of World War II, serving in the Philippines. He went to college after the war on the GI Bill and graduated from the University of Utah in June, 1951. Shortly after, on June 22, 1951, he married his beloved Phyllis Norris in the Salt Lake Temple. Together they raised six children in their home in Bountiful Utah. David worked in many different fields of business; the majority of his career was spent in the banking industry. After retirement in 1983, he devoted his full time to real estate development and investments. David was a devoted member of the LDS Church who served as an ordinance worker at the Bountiful Temple as well as filling many other callings. His passionate hobby was genealogy, he even travelled to England searching for distant ancestors. On any fair weather day, he could be found on the golf course or at the fishing hole. He and Phyllis travelled widely and often. More than anything, they enjoyed time with their extended families and a good game of cards. David is survived by his six children, Rori (Nancy), Karen Piggott-Brenner, Joanne Piggott, Laureen Wilson, Nathan (Bonnie), and Richard (Angie), 13 grandchildren, and one great-grandchild. He was preceded in death by his wife, Phyllis, his parents, and his siblings. Visiting hours will be held on Wednesday, May 19, 2010 at Russon Brothers Mortuary (295 North Main, Bountiful, Utah) from 6-8 p.m. Funeral services will be held on Thursday, May 20, 2010 at 2:00 p.m. at Mueller Park Seventh Ward (1800 E. Mueller Park Rd., Bountiful, Utah); visitation one hour preceding at the church. Burial will follow at Lakeview Memorial Park in Bountiful (1640 E. Lakeview Dr.). On-line guestbook at www.russonmortuary.com In lieu of flowers, please make a donation in his memory to a charity of your choice.

Aunt Rebecca and uncle David were both instrumental in learning about my Piggott genealogy and family history.  While looking through old pictures with aunt Jean I found these photos of uncle David and aunt Rebecca. 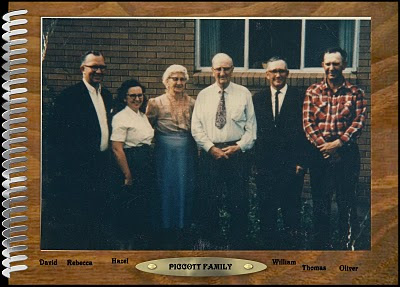 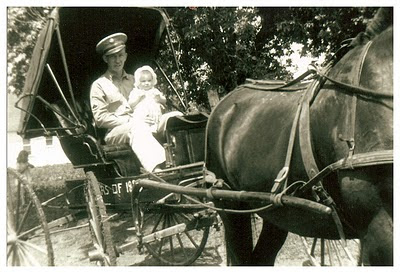 The next few posts I will share the fruits of my time spent in Idaho.

Posted by Leslie Ann at 4:38 PM No comments:

Be Back in a Couple of Weeks

I will be back home in Idaho for a couple of weeks so there wont be any new posts until I return home.  Hopefully I will come back with some wonderful genealogical adventures :-)