Today is Paperback Book Day! In 1935 Allen Lane, then chairman of the British publishing house Bodley Head, pursued the possibility of publishing popular fiction in paperback when he couldn't find anything decent to read while waiting in a train station.

The folks at Bodley Head were not on board with the endeavor so that's when Mr. Lane started his own publishing house and he called it Penguin books.

So to celebrate this occasion I ordered a paperback! Not just any paperback, but one about one of my ancestors.

Their son Thomas was tried and convicted of her murder. Ironically he was the ancestor of Lizzie Borden.

I can't wait until it gets here! I just love the smell of a paperback book. Don't you?

Why You Should Search Google by Image

Last week I decided to run an image search using the newly found photo I found back in April on FamilySearch of my 3rd great-grandmother Ellenor Creighton Pugmire.

I was hoping by chance that I could find more information using her photo. After all, she is one of my ancestors that I know so little about. Well, I didn't find any new information but what I did find left me feeling perplexed.

It turns out that this very same photo was attached to someone named Elizabeth Creighton. 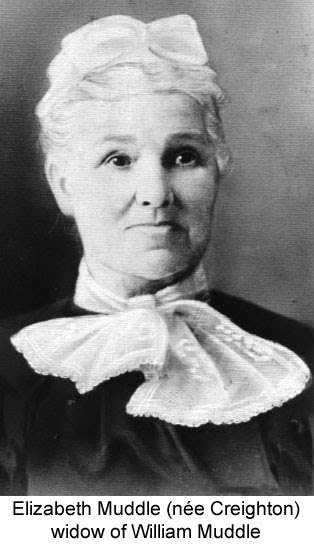 This image was found on the website THE MUDDLE FAMILIES. I sent an email to the webmaster through his contact link, but that hasn't been updated since October of 2012 so I don't know if he will get it or not.

I can't get in touch with the person who uploaded the photo to FamilySearch because they didn't leave an email address or any other contact information. So now I am left wondering if this beautiful woman was my 3rd great-grandmother or not!

However I did notice that just below this photo on his website was a photo of one of her daughters and I think there is a little resemblance. If you click on the link above to that website, maybe you can tell me what you think.

I also found this same photo attached to several family trees on Ancestry.com that Elizabeth Creighton Muddle was a part of.

So I thought I had better run image searches using the other photos that I found on FamilySearch. I found two more photos that were claimed to be someone else. Luckily I was able to sort one of them out because I found a family photo with the lady in question on a different website.


According to the Ferntree Gully Cricket Club website this is a photo of George H. Pickett who was a member of the cricket club and fought and died in WWI. According to FamilySearch this is my 3rd great-grandfather George Pickett (1821-1857).

I highly encourage you to click on this link => search by image <= if you have ever downloaded an ancestor photo from:

And if you need to search by image from your Android phone, you will need the Google Search By Image app.

Leslie Ann
Posted by Leslie Ann at 2:54 PM 3 comments: Links to this post 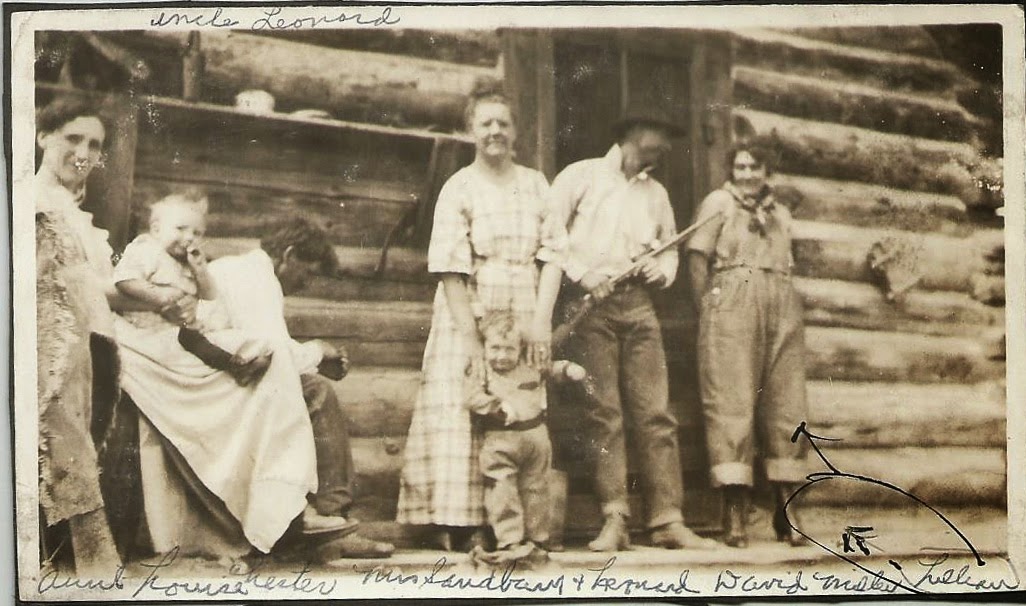 Leslie Ann
Posted by Leslie Ann at 3:11 PM No comments: Links to this post


These are some more photos that were in the possession of cousin Bruce. It took me a while to realize that some of the photos were taken on the same day, or at least in the same place. 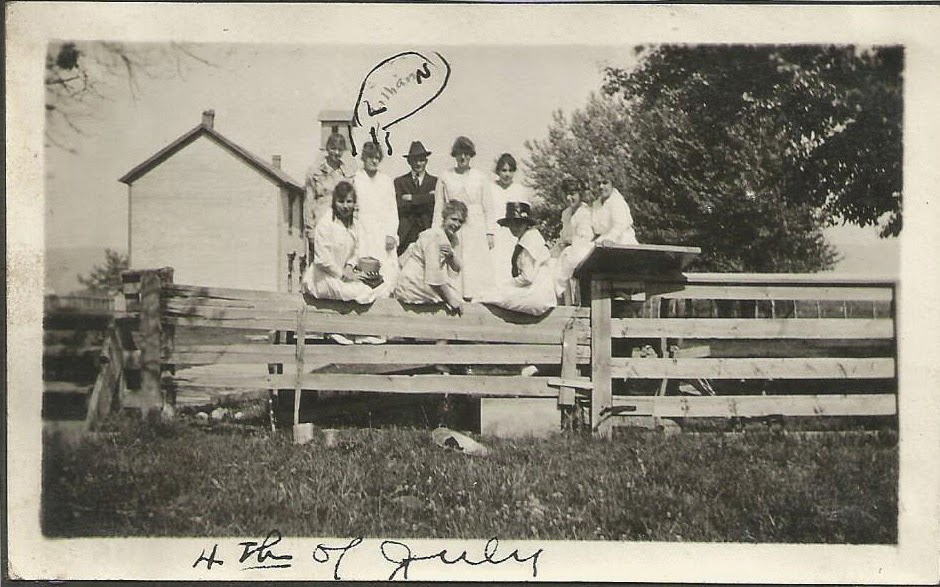 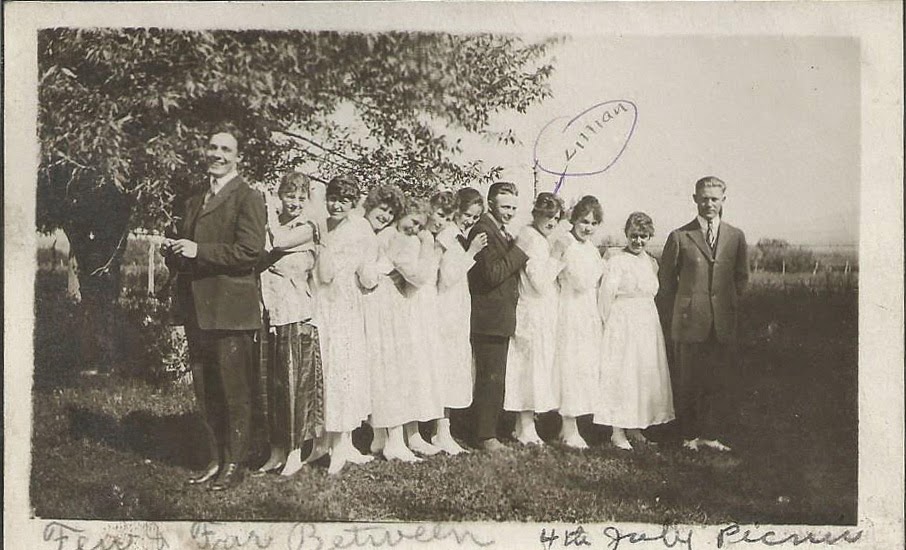 I have no idea who are in these photos, well except for aunt Lillian who has a big circle around her face. I hadn't a clue where the photos were taken either, but I was bound and determined to put on my detective cap and find out.

First, I realized I needed to know more about aunt Lillian. That's when I realized that I didn't even have her obituary. Thanks to the Digital Archives of Bear Lake County Library I found it. It was published in the News Examiner on August 31, 1989. Unfortunately, I can't post it, but if you follow the above link you will find it.

From her obituary I learned that she received her teaching certificate from the Albion Normal School in 1929. I was even able to find the 1929 yearbook on Mocavo. Unfortunately I am not a paid member and can't view the image in high definition so I can't even pick her out of the group, or see if any of these unidentified faces are also there. She is listed as Lillian Langford as a Senior Emersonian on page 70, and a Senior Philo on page 72.

So I have been googling the school for about two days now and have found enough photos of the campus to feel certain that these photos were indeed taken at the Albion Normal School located in Albion, Idaho.


I have also noticed that some of the ladies besides my aunt are in more than one of these photos. And I also realized that this photo I posted earlier must also have been taken on the campus. 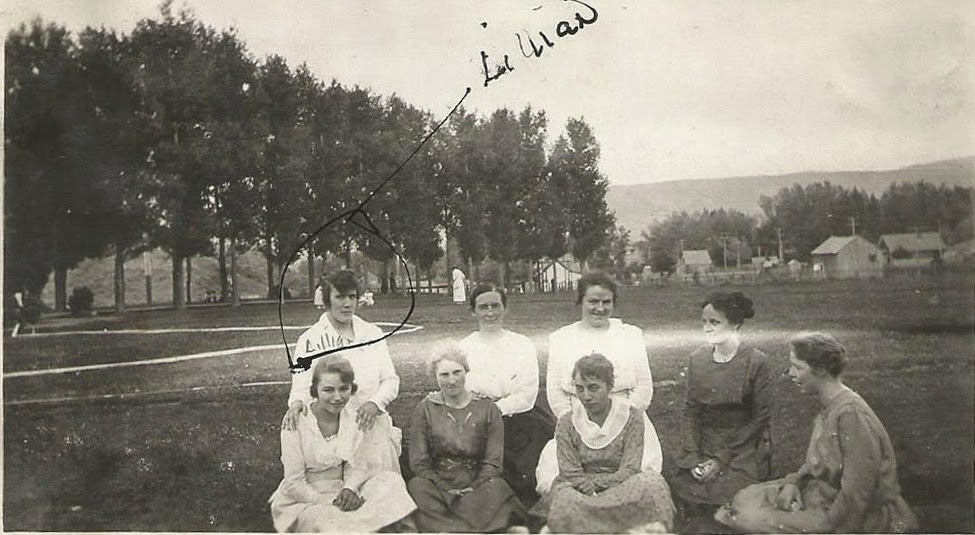 You can see photos of all the buildings here.

The campus has been turned into a retreat, a great place for family reunions and stuff. It also turns out the Albion has a reputation of being haunted. Check out all the spooky links:

Leslie Ann
Posted by Leslie Ann at 6:25 PM 4 comments: Links to this post

Email ThisBlogThis!Share to TwitterShare to FacebookShare to Pinterest
Labels: Albion Normal School, Friday's Faces From the Past, Smedley 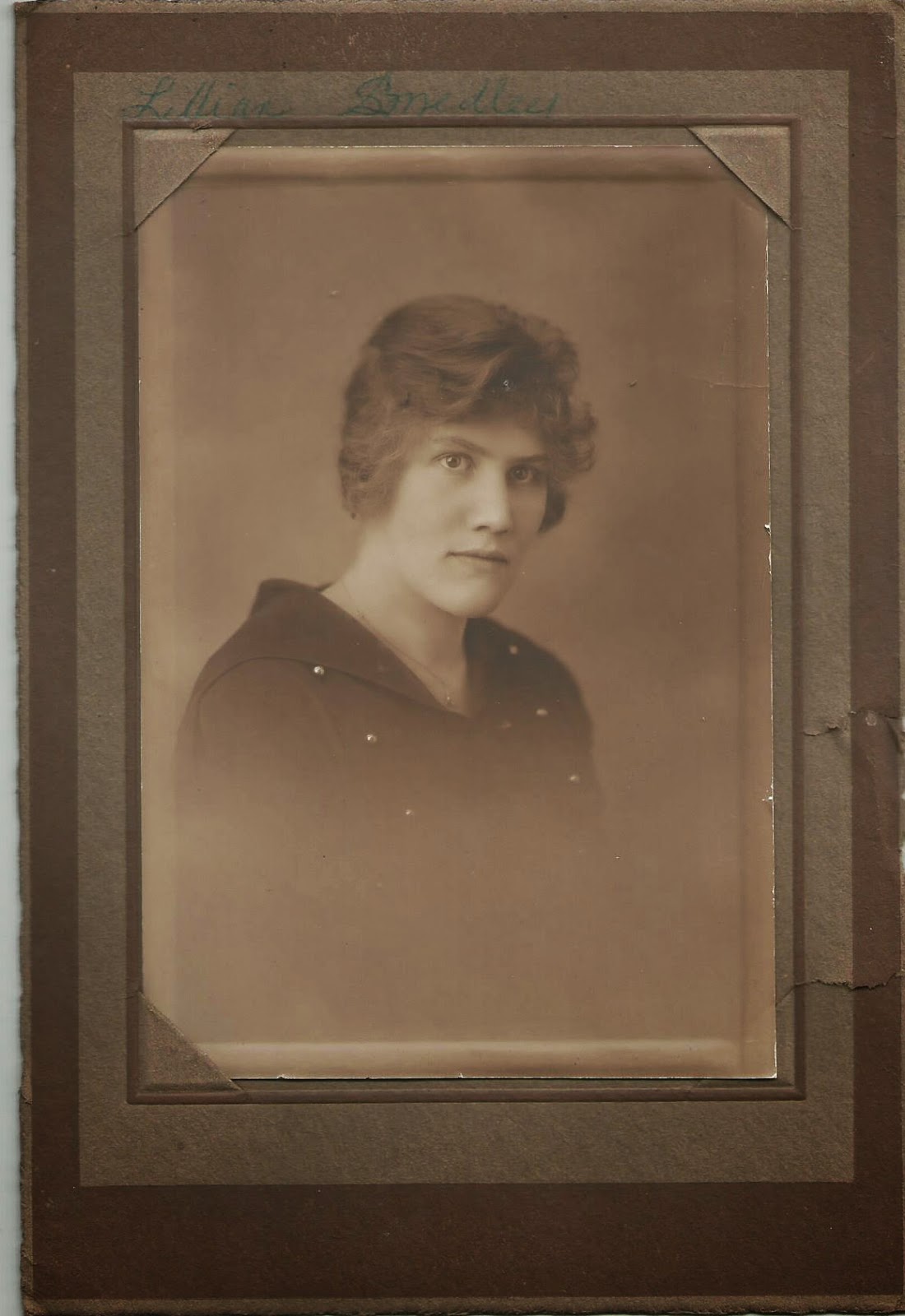 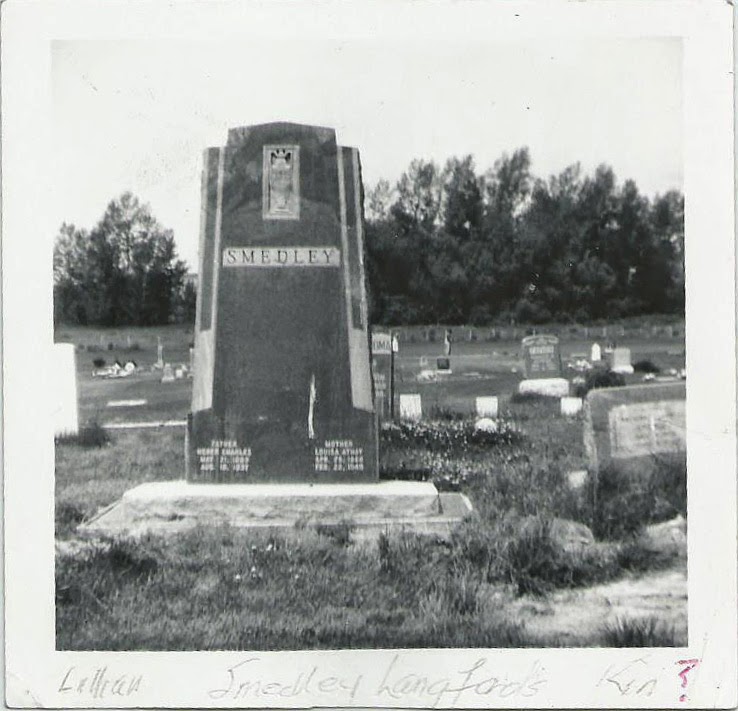 This photo was among those that were in my second cousin Bruce Langford's possession. It is the headstone of Heber Charles Smedley in the Paris City Cemetery, Paris, Idaho. Heber was my great-uncle.

I can't be certain when the photo was taken, but obviously it was sometime after August 1937 when he died.

The photo below is from his Find A Grave Memorial.

Notice how even the cemetery has changed. In the later picture the trees have been removed and you can see the small rolling hills in the background.


Posted by Leslie Ann at 2:53 PM No comments: Links to this post 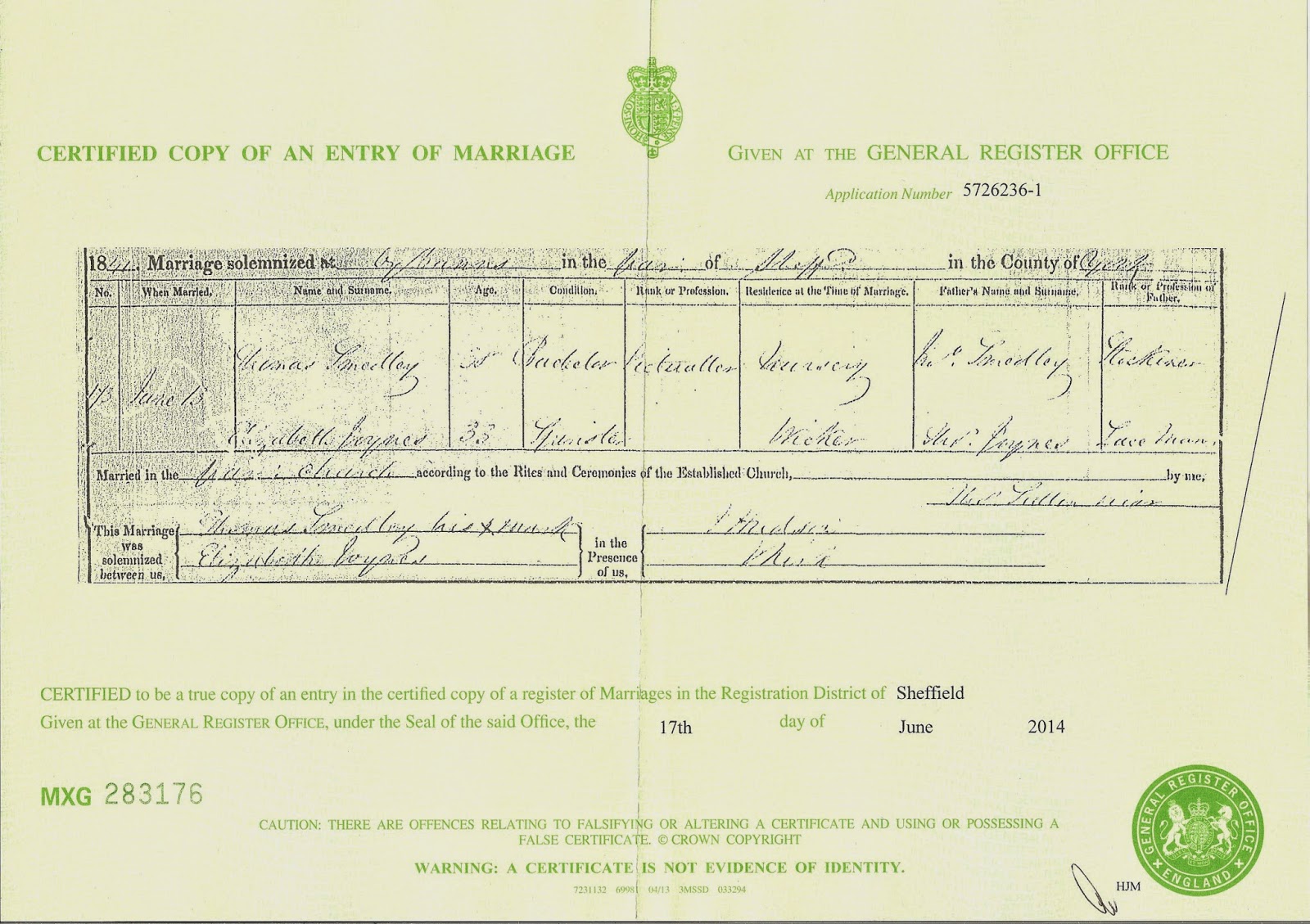 Yeah! I finally received the marriage certificate I was telling you about. It took long enough.

The writing is kind of faint in places so it took awhile to read correctly, however there are still two words I can't make out.

I still can't read who the witnesses are. If you have any ideas, please let me know.

And of course this certificate causes me to ask a couple of questions.
And here is the birth certificate of their only child together: 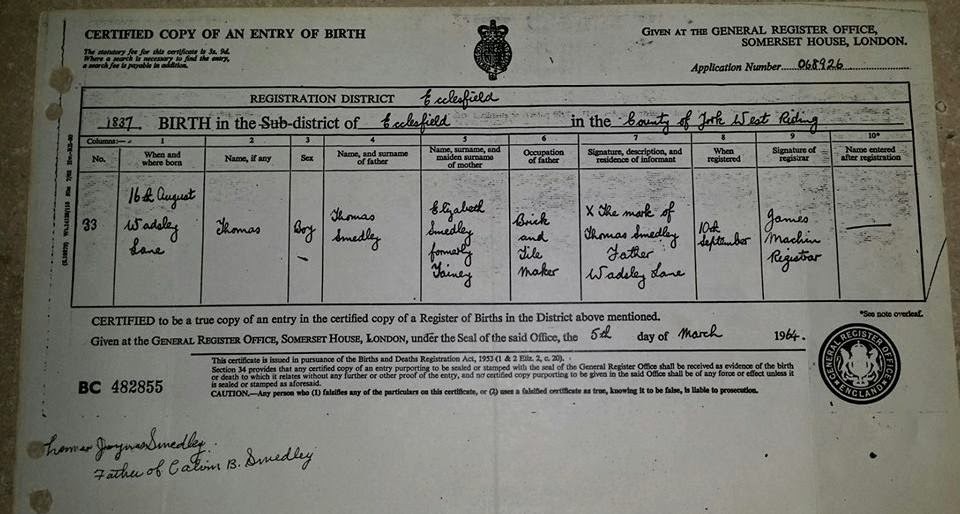 See how Elizabeth is shown with the last name "Smedley formerly Tainey"? I think it should actually say "Joynes" and whoever recorded this information in 1964 misread it as Tainey. Anyway, were they really married at this time, or possibly waiting for his marriage with Martha Mitchell to be legally dissolved? Or, was that first marriage ever really dissolved?

So there you have it, more knowledge brings more mysteries.


Posted by Leslie Ann at 4:02 PM No comments: Links to this post


Leslie Ann
Posted by Leslie Ann at 5:23 PM No comments: Links to this post 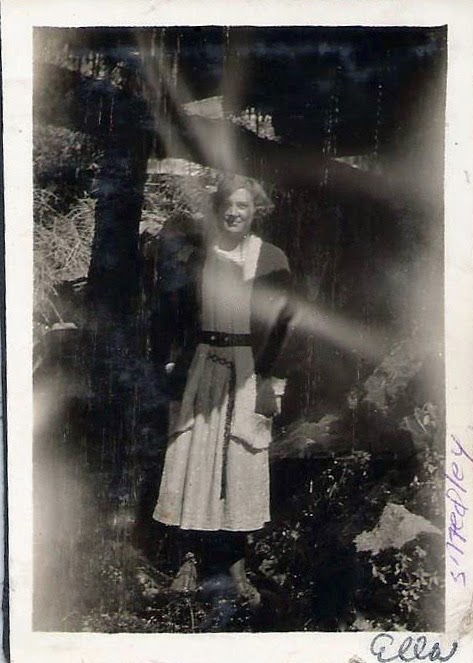 Leslie Ann
Posted by Leslie Ann at 3:56 PM No comments: Links to this post