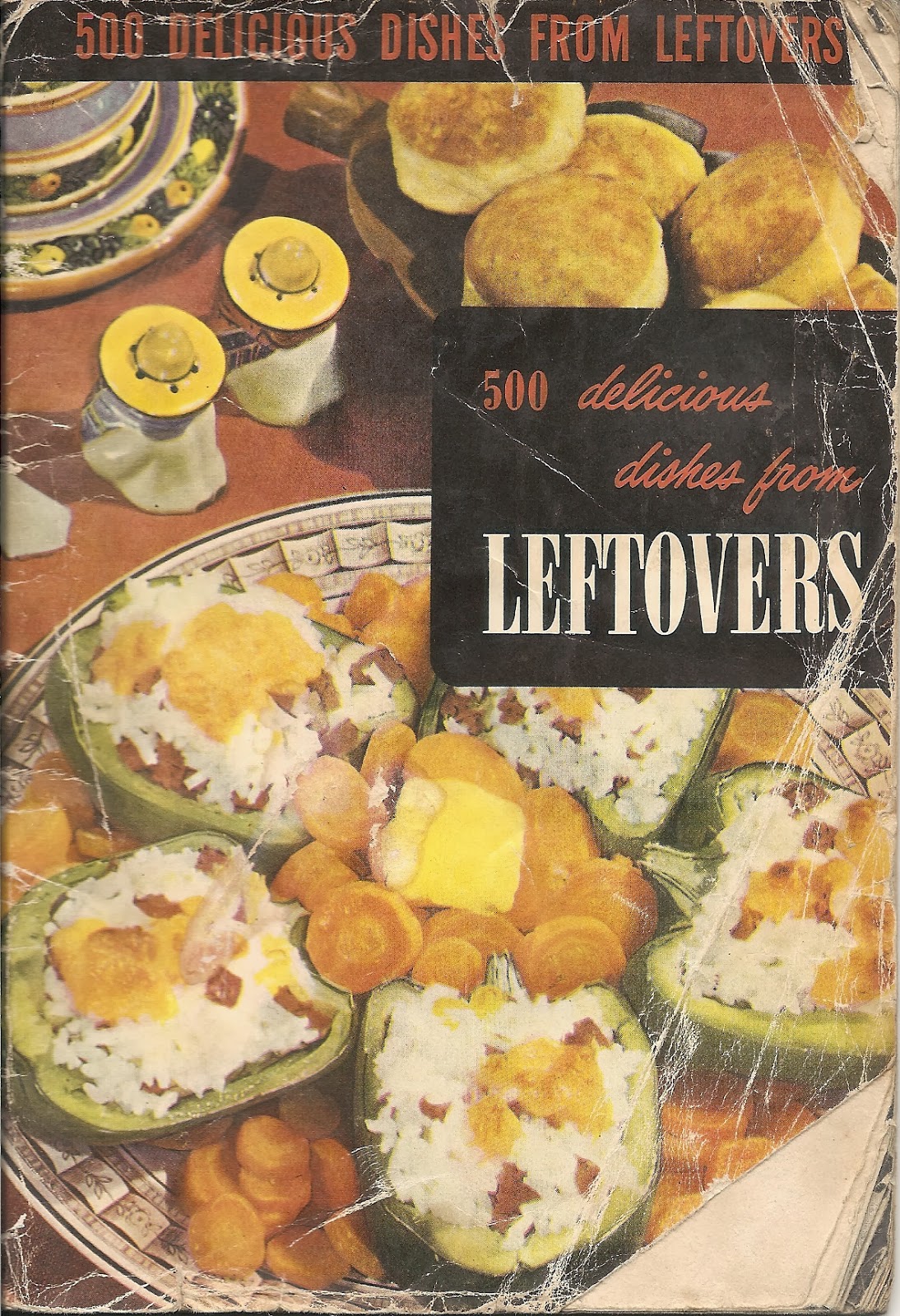 Back in the eighties my paternal grandmother gave me this little paper back cook booklet. She must have thought I needed it, being a new wife and mom and all, but to be honest I don't think I ever used it. It's just something cool that my grandma gave me.

I looked through the recipes and can't seem to find one that sounds familiar so I don't really know if grandma used a recipe from this book either.

However, there are two recipes cut from the wrapper from a Crisco can glued to the inside front cover. I can just see her now moistening the back of the perfectly cut recipes with a bottle of LePages glue.


The recipe for Chow Mein And Fried Noodles does sound familiar. 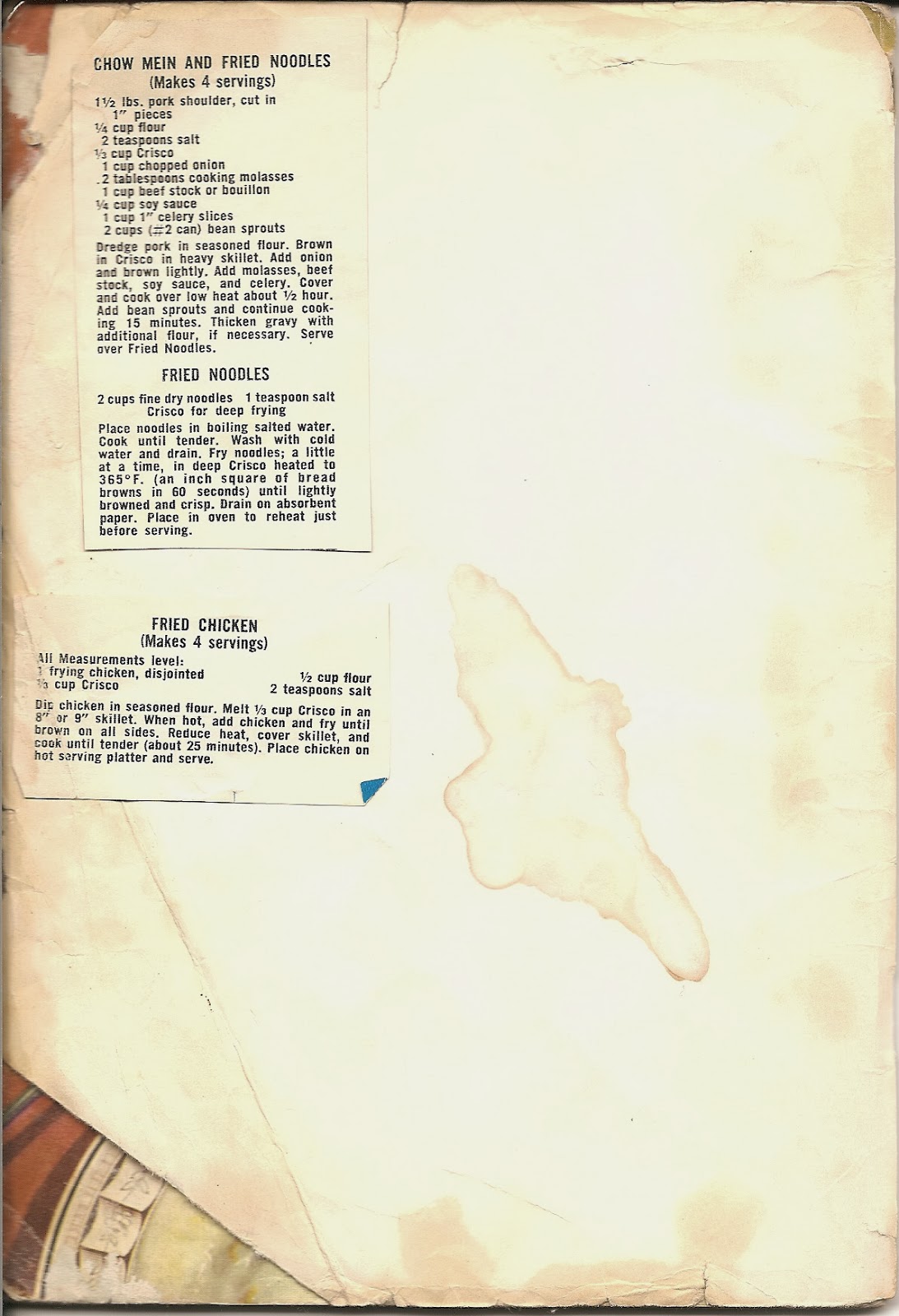 Who'd a thought that you could make something with your leftover coffee? Next time you have some coffee left over in the pot don't throw it out. Make some baked coffee custard, or how about a coffee spice layer cake. 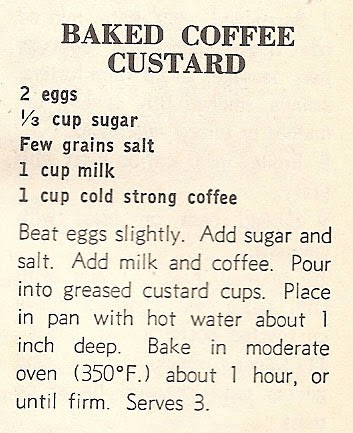 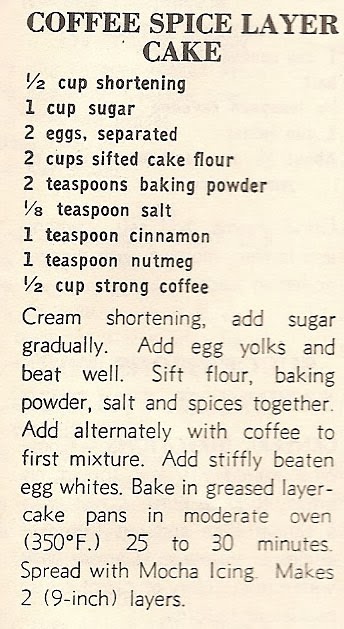 Oh, I almost forgot about the Mocha Icing. 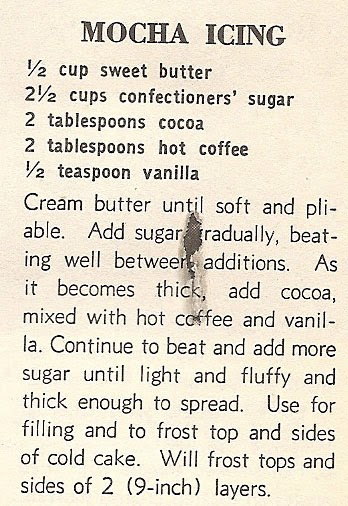 Some of these recipes have pretty strange names. Some of them look like something I might try. Some of them make my stomach curdle just thinking about them.


Any of those sound appetizing? Or maybe you're just curious enough to know what the recipe is. Which ever the case may be, let me know in the comments and I may just post one. :-)


$50 REWARD. --- Absconded from Pass Christian, on or about the 28th of June, a mulatress named MINERVA -- the property of Mrs. Sarah Hanna, and a servant in the family of Ed. Yorke. She is about 20 years old; hair long and curly; shows her teeth much when speaking; two front upper teeth much separated; cheek bones high, and rather good looking. She is known to be in possession of free paper, and to have made application to several steamboats for a passage to Chester, Illinois---once by a white man, dressed in gentleman's clothes. Captains of steamboats and ships are particularly cautioned. Twenty-five dollars reward will be given for the apprehension and delivery to the subscriber, if apprehended in the State, or one hundred if apprehended out of it.


Leslie Ann
Posted by Leslie Ann at 2:48 PM No comments:


Today is National Hug Day. Did you know that hugging is healthy? It can lower the risk of heart attack, fight stress and boost your immune system. And besides that, it just plain feels good.

So in celebration I am going to share a few hugging photos.

Don't forget to hug your daughter today, or your son, or your parents, or your grandkids, etc. Heck, go hug your neighbor.

It really hurts my heart when some parents disown or sever ties with their adult children for following their hearts or dreams. How torn one must be to stand behind their convictions whether religious or vocational and not have the support or approval of the two people that mean the most, the parents who did their job in nurturing and instilling moral values. Such is the case of my 3rd great-grandmother Mary Edwards.

That being said, it's even more infuriating from a genealogist's point of view. Can you say "brick wall"? There are plenty of records and histories that tell her story after she arrived in America, but records of her life before that are very few and far between. For an account of some of her eventful life you can read the following previous posts:
I am following bread crumbs from family histories, journals and diaries of others who followed the same path. I know that she was born September 30, 1810  in Llanrwst, Denbighshire, Wales to a Thomas and Eliza Edwards.

The following is an excerpt from a family history entitled "The Life and Ancestry of Elizabeth Cannon Piggott", written by Alice C. Reay. Alice was a granddaughter of Mary.

"Mother's mother was born in Wales. Her father's name was T. Edwards and her mother's name was Mary. I have a letter written by my granfather in Llanrwk, Wales, on June 18th 1863.

Mother always felt that when grandmother joined the Church, there had been a rift between them that had never been bridged. When grandmother died in Salt Lake my mother promised her that she would let her fathers know of her passing away.

Mother tried very hard to keep that promise but, she had no address to go by. She had a friend in Liberty, Idaho, who had just returned from a mission in Wales. Mother went to him to see if he could tell her who she might contact in Wales who would likely help her to locate some of the family, if any were still alive. He told her as best he could who to contact that would help her if possible. She followed his instructions to the letter. After a long, long wait she received a reply, but it was written in Welch. So that said she would again have to contact her friend in Liberty.

This letter contained simply a few verses in poetry, signed, The Bairds Sister, mother knew she had a brother, John. When reaching the friend again he said, "Yes, Sister Piggott, I can read it but it will cease to be poetry." I don't know what became of these lines, but I do know she never was able to again reach him. This is all I can give you of my grandmother's family."


I am fairly certain that aunt Alice made a mistake when she said "her mother's name was Mary". After all she was writing the history about her mother, whose mother was named Mary. And I believe from this writing that I can connect John Edwards a.k.a. "Meiriadog", the Welsh poet as Mary's brother.

The next bit is from book "George Cannon The Immigrant", by John Q. Cannon, published 1927, page 130. This certain passage is referring to George Cannon after his first wife Ann died.

"His domestic arrangements, however, were far from satisfactory.  As has been said, his eldest son and his second daughter had become inmates of the household of his sister and his brother-in-law; and the eldest girl, Mary Alice, now fifteen years old, was dutiful, prudent and motherly.  But there were three younger children who needed, he felt, the watchcare of a more experienced woman, while in his own case a relief from his present lonliness was much to be desired.  In this condition of mind, his thoughts reverted to a pleasant young woman from North Wales, Mary Edwards White by name, who had been a fellow-passenger on the ship Sidney from Liverpool to New Orleans, and who had also come to Nauvoo on the season's first trip of the Maid of Iowa.  In age she was sixteen years his junior, but she was now in her thirty-fourth year, and he believed she would make him a good wife and be a good stepmother to his children.  He wasted no time in prolonged courtship, but made his proposal soon and seriously; and she, with full consciousness of her responsibilities, accepted him.  They were married on the 24th of February, 1844."


I could never place grandma Mary on the ship Sidney because her name wasn't among the passengers in the accounts of the voyage. There were 180 Saints aboard this ship, and I just now noticed that this passenger list consists of 179 passengers. Could my Mary actually be the missing passenger?

The next excerpts are from a family history that my great aunt Rebecca P. Gardiner wrote. It's called, "My Pioneer Family":


Parley P. Pratt was a Missionary who was sent to Canada to spread the Gospel of Jesus Christ of Latter Day Saints to the people their. Here he met a Minister by the name of John Taylor and his wife Lenora, they both joined the Church and then John Taylor had to go and meet the Prophet Joseph Smith. He was later called to go to England on a Mission, and just before he left his wife gave him a letter to give to her brother and said, "Convert my Brother to the Church".

In this group was my Great Grandmother Mary Edwards a daughter of a Baptist Minister, and was working for Lady Manering for she was a Mastery of Cooking and housekeeping and the little children loved her. this was during 1840 when Mary Edwards and her dear friend Ann and George Cannon joined the Church. Finally Lady Manering found out that she had joined or belonged to the Mormon Church and, Since you belong to that despised Mormon church I must let you go unless you give up your religion or I'm afraid you will ruin my business, though I hate to let you go I have no other choice. So Great Grandma left and found work at a boarding school. Here she was called names and was insulted so she left and moved to Liverpool where she met Joseph White and was married abt. 1841-1842 also at that time she decided to go back to Wales to see her parents before leaving for America. Her father told her "When you denounce your religion you may come home". Joseph White passed away their was no explanation. After 40 years Lady Manerings son still rememberd Great Grandma and loved her very much so he came to Utah to see her.

I have literally gone crazy trying to figure out who Lady Manering is! The only other mention of this Lady I can find is this history of Leonora Cannon Taylor on Google Books. So this may connect her to Leonora Cannon before 1840.

I have jumped aboard the Flipboard train and created a magazine called Following the Crumbs...to Grandma Mary. As my search continues for evidence I will add whatever I encounter.

Well, off I go to the next bread crumb.


The holidays are finally over and I think I can ease my way back into blogging. I wanted to start by showing you the cover of the family calendar that I made this year. Actually I made two, one for my side and one for hubby's side. 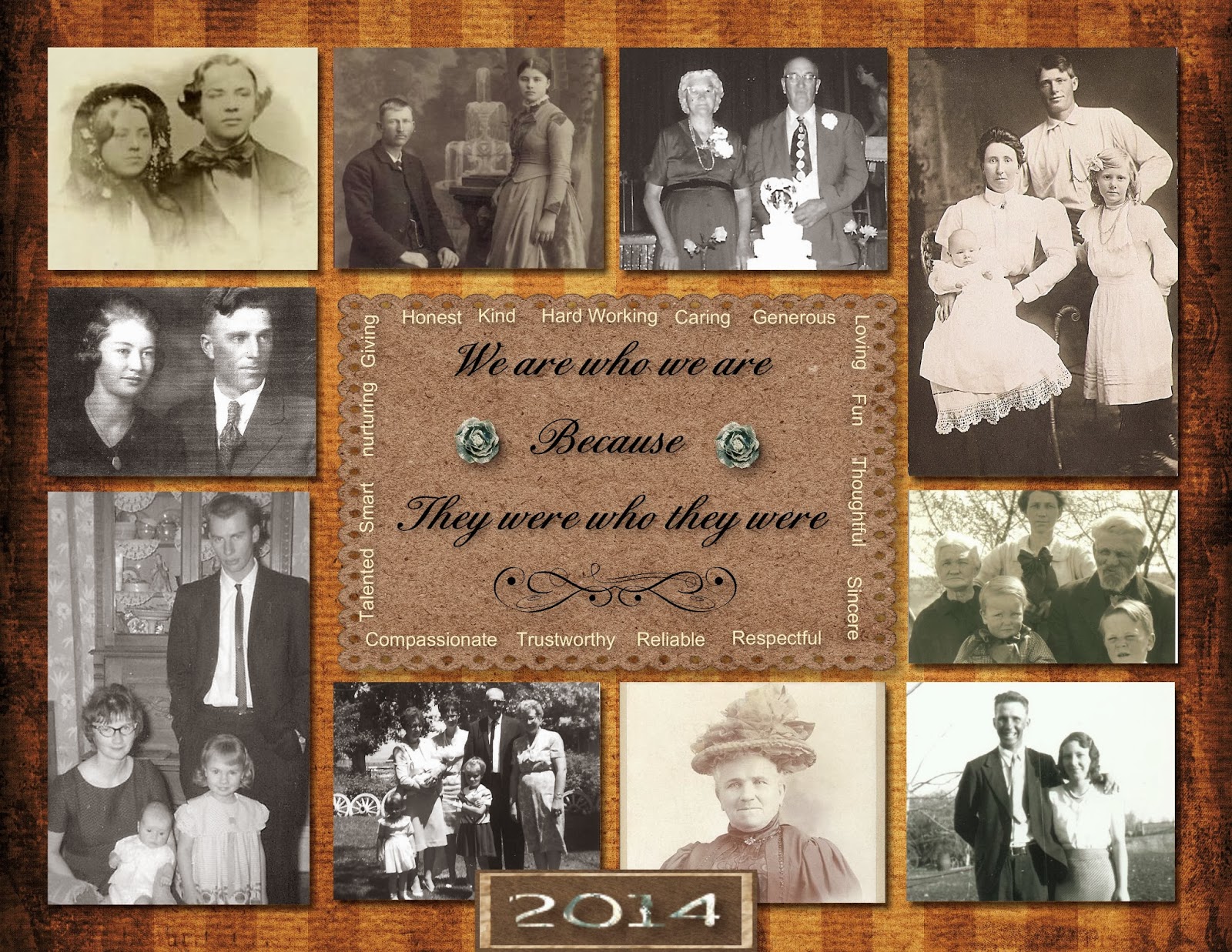 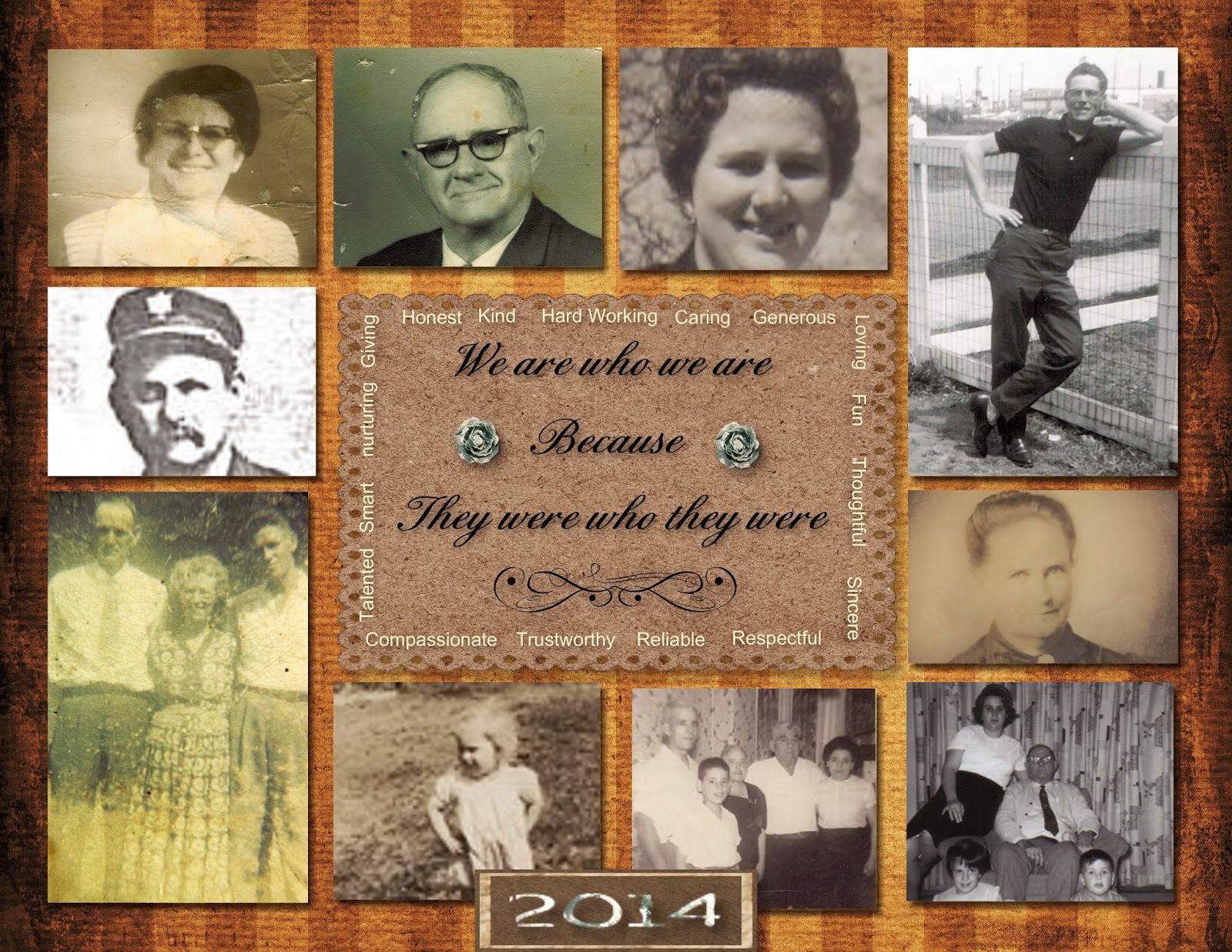 I got the idea of this particular layout from this website.

Now for the tellin'. I got a new computer and a touch screen monitor for Christmas. Skipping a few generations I went from Windows XP to Windows 8.1. I'm still getting familiar with its ways, but I can tell you for sure that some of them are plain wicked! For example:
Speaking of apps, I admit some of them are kind of cool. I searched around for some that would be useful to me. This is what I have come up with so far:
If you know of any others that are genealogy or history related, please let me know.

Leslie Ann
Posted by Leslie Ann at 2:38 PM No comments: 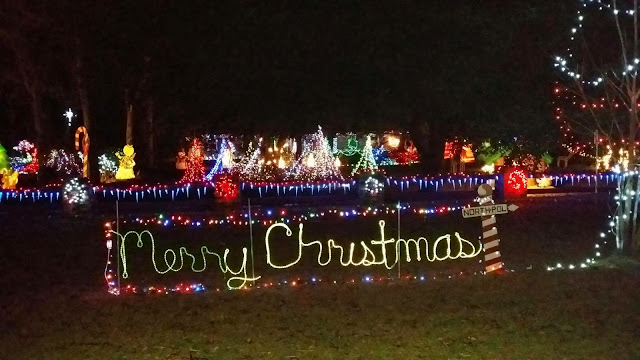