My very first pet was a goldfish, actually two goldfish.  I think one of them I named Spot cause he had a little white spot on him.  They swam in this cool rectangular fish tank.  The rim had a bubble design on it.  Sure wish I still had it.

One of my babysitters overfed poor spot and his swimming buddy so that next morning they began their journey through the sewer system of Pocatello, Idaho.
We never had another fish after that.  Daddy seemed to think I just couldn't take care of another one. I kept telling him it wasn't my fault, it was the babysitter's!

We wanted a cat so bad for the longest time.  We were at my uncle Darrell's in Montpelier one summer day in 1972.  Their cat had kittens a few weeks earlier and aunt Vella said we could have one, but it was hard to talk dad into it.  The cats had the run of the place and dad said if we could catch one, we could keep it.  Looking back now, he was probably thinking that we couldn't catch one.  Well, sister caught one in the middle of pile of fire wood.  Meet Princess: 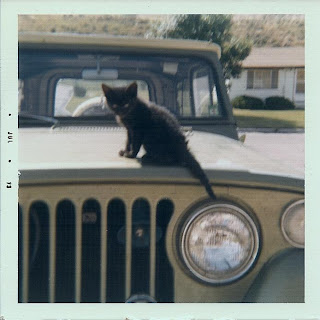 Poor Princess didn't live too long.  One day mom started the car and heard a funny noise.  When she lifted the hood, out popped Princess.  Not a pretty sight.  I think I cried for a couple of days.  I can just imagine how poor mom felt.


A couple of years later we got Jinxie: 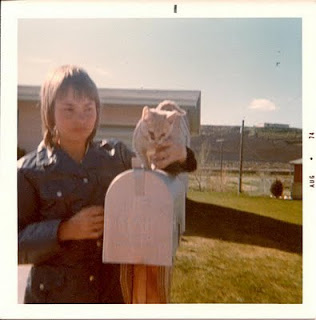 Poor little guy had pink eye when this photo was taken. We had him for a while.  We ended up having to put him to sleep, but for some reason I can't remember why. 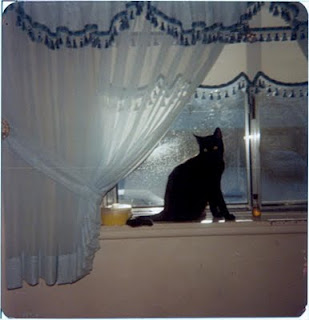 We named him T.J after mom and dad, Tom and Joyce. 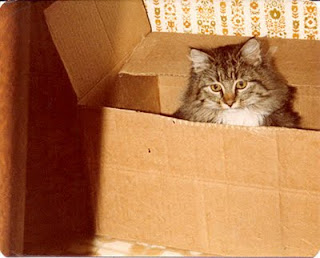 She had a batch of kittens and we ended up keeping one of them.  His name was Tony.

The first pet I had when I got married the first time was Sammy. 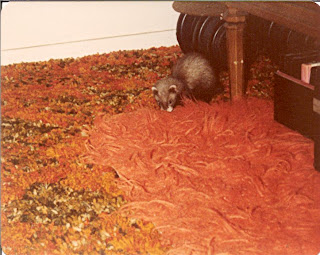 She was the best ferret. One day I heard noises in the kitchen and I happened to be sitting on the floor. I was crawling on my hands and knees to peek around into the kitchen and at the same time Sammy was coming around the corner.  We both screamed after being startled.  It was hilarious! We gave her away after the baby was born.

Then later when the kids were older each one had their own pet rat. Monster Rat, Gyro and I can't remember the other one's name.  It was a night mare after we found out that one of them was a girl: 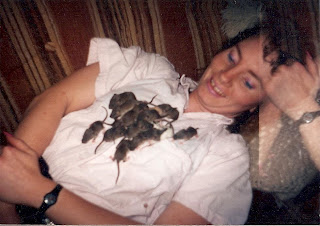 It took me a while, but I finally got rid of all the babies.

After I got divorced I had 3 pets; Ginger the ferret, a goldfish, and  Snickers the dog. 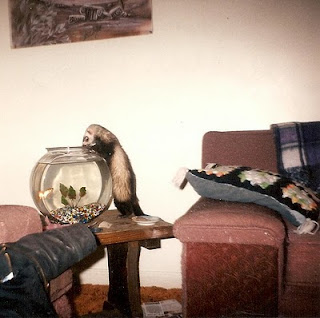 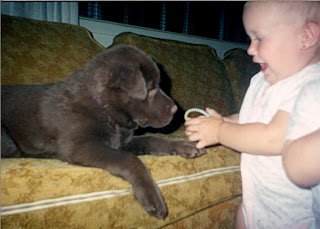 Before hubby and I got married he gave me an aquarium full of fish for our first Christmas together. We had to leave them in Idaho with mom.  She took care of them for a while, but they have now found their way to the Pocatello sewer system. 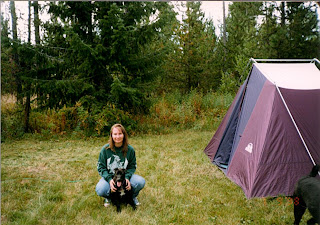 He had an accident with a car.  He is buried on the hillside at grandpa Marve's in Inkom, Idaho.

In 2001 we got Missy from the animal shelter:

We almost lost her once.  She escaped mom's backyard when I was at work and was run over by a car.  When hubby found her she was lying on the sidewalk with a sheet over her.  They said she was dead.  Hubby uncovered her and started talking to her and she opened her eyes. He insisted they get her in a hospital RFN! It took two or three weeks, but she finally healed and came all the way to Florida with us. 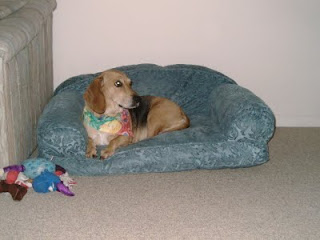 Well there you have it, my life in pets.

Thanks to Amy Coffin at We Tree for coming up with this series.

Email ThisBlogThis!Share to TwitterShare to FacebookShare to Pinterest
Labels: 52 Weeks of Personal Genealogy

Posted by Leslie Ann at 9:07 AM No comments: Links to this post

This week for Amanuensis Monday I am reaching into the second batch of grandma Hazel's ephemera goodies.

She received this letter from her cousin Elizabeth Sarah Bake Jones. The letter suggests that she went by "Lizzie".  There is no date on this particular letter, but it was in an envelope with another letter that was written by Lizzie in Feb of 1955. 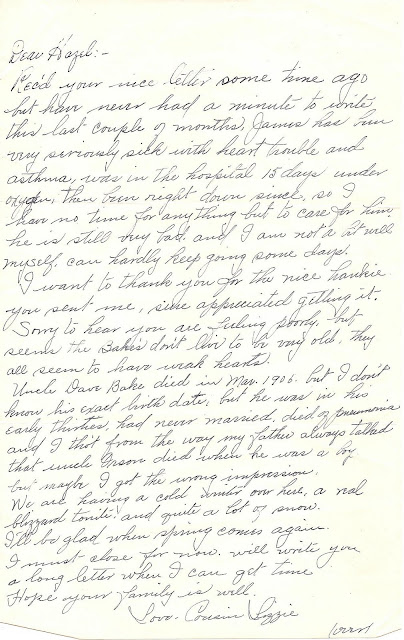 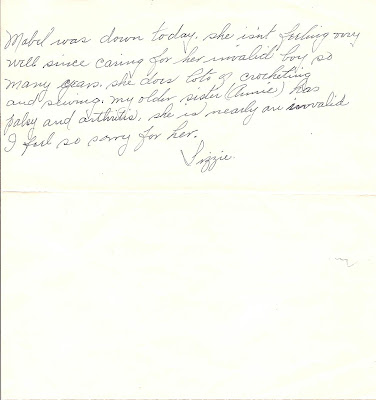 Dear Hazel:-
Rec'd your nice letter some time ago
but have never had a minute to write.
this last couple of months. James has been
very seriously sick with heart trouble and
asthma, was in the hospital 15 days under
oxygen, then been right down since, so I
have no time for anything but to care for him
he is still very bad and I am not a bit well
myself, can hardly keep going some days.
I want to thank you for the nice hankie
you sent me, sure appreciated getting it.
Sorry to hear you are feeling poorly, but
seems the Bakes don't live to be very old, they
all seem to have weak hearts.
Uncle Dave Bake died in Mar. 1906. but I don't
know his exact birth date, but he was in his
early thirties, had never married, died of pneumonia
and I thot from the way my father always talked
that uncle Orson died with he was a boy
but maybe I got the wrong impression.
We are having a cold winter over here, a real
blizzard tonite and quite a lot of snow.
I'll be glad when spring comes again.
I must close for now. will write yo
a long letter when I can get time
Hope your family is well.
Love, Cousin Lizzie
(over)

Mabel was down today. she isn't feeling very
well since caring for her invalid boy so
many years. she does lots of crocheting
and sewing. my older sister (Annie) has
palsy and arthritis. she is nearly an invalid
I feel so sorry for her.
Lizzie

Posted by Leslie Ann at 6:02 PM No comments: Links to this post

Here is yet another postcard from the collection of grandma Hazel's ephemera. 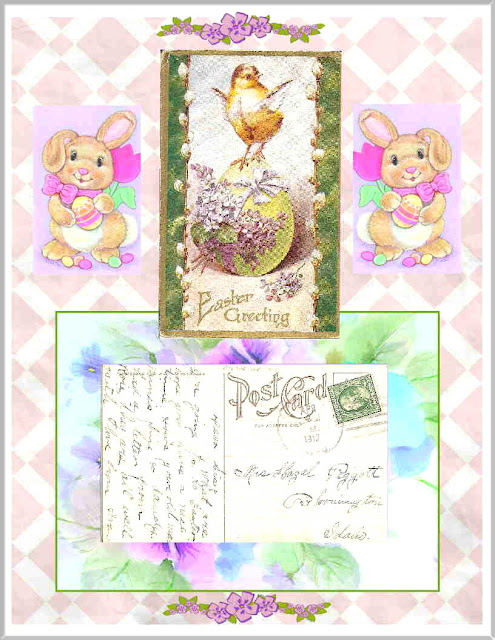 This postcard is stamped Apr 4, 1912 and is addressed to Mrs. Hazel Piggott.

Dear Sis-
What are
you going to do Easter
hope you have a nice
time. How's your old man.
Mine's fine & dandy.
had a letter from
Roie, they are all well.
with love from Iva.x

Iva makes sure to write across the top "ans soon".

Amanuensis Monday is an ongoing series created by John Newmark at Transylvanian Dutch.
Posted by Leslie Ann at 2:14 PM 3 comments: Links to this post

So did you watch Who Do You Think You Are? last week with Ashley Judd?

If you know Geni like I do, you know that they post a link to the profile of each week's star on their blog as Profile of the Day. Just for fun I like to go on over there and check it out to see if hubby or I are related.  This is the path that I found:

Of course I had to double check it to make sure it was accurate.  My database only went as far as Willoughby Skipwith.  While doing some googling I stumbled onto this Slovak Yankee blog post and discovered that my Skipwith line goes back to royalty. Not only that, I discovered that I actually have an ancestor that was a doctor through this line. The following paragraph is from page 178 of The Roll of the Royal College of Physicians of London: 1518 to 1700 By Royal College of Physicians of London, William Munk, G. H. Brown.  If you click on the paragraph, it will take you to the page on Google books.


Dr. Saunders is my 11th great-grandfather.

I also discovered that I am not actually related to Ashley Judd through this line. My 10th great-grandfather Willoughby Skipwith, Esq. was actually the son of Anne Portington, not Anne Hussey.

However, I did eventually find a connection to Ashley Judd.  She is my actually my 12th cousin twice removed from the Brewster line. 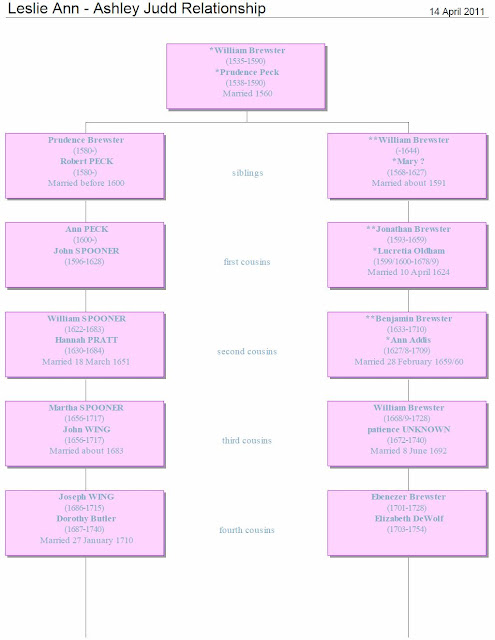 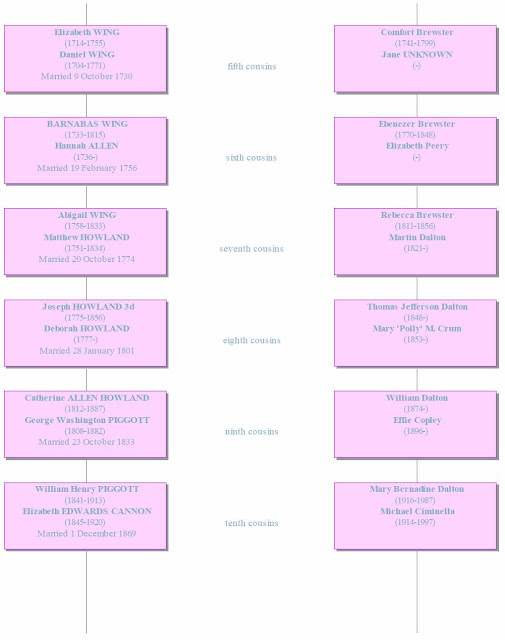 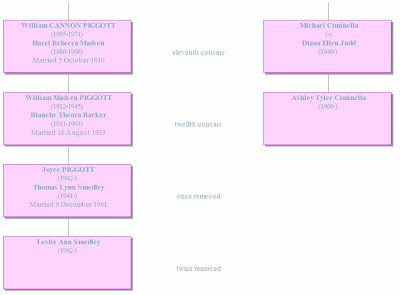 So my friends, it is well worth your time to go check out Geni Profiles of the Day. Even an error can lead you to a wealth of information. 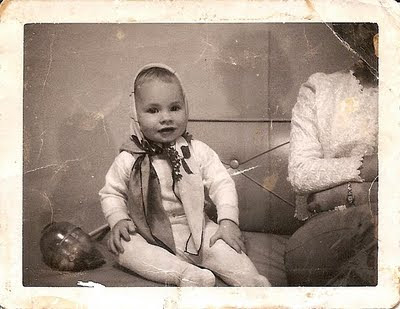 Posted by Leslie Ann at 9:19 AM 3 comments: Links to this post

This letter was among the second batch of grandma Hazel's ephemera.  It was written to grandma Hazel by Lillie Cornia.  Lillie is the daughter of John Rich and Mary Elizabeth Piggott South (my great grand aunt) which makes her my first cousin twice removed. 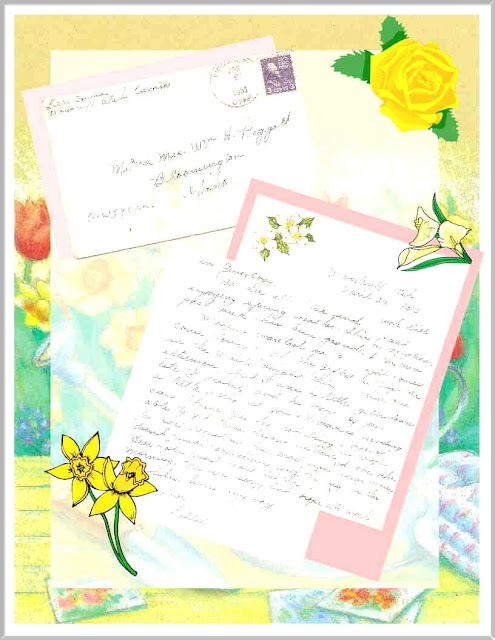 Dear Aunt Hazel & Uncle Will.
We are sorry we can't
make it down to the reception.
We'd love to come but the men
are too tired when hight comes
to feel like making the trip. We
do hope you have a nice one.
We are sending our gifts down
and also the genealogy you
asked for. I am also sending
a couple of pictures, one of
Grandma (that I'm sure Uncle
Will will recognize) and the other
is her mother.  I had them  made
up while I was working in the
Temple and doing a little work.
in genealogy. (page 1)

We are all fine and
enjoying spring weather. This
past week has been grand.
Maynie wanted me to
come down & get the gifts
in the mail tonight this
afternoon, but I was a little
late (I washed) and he was
a little early so you & Rebecca
can blame me for not being
able to get them down in time
for the reception. Our mail man
doesn't make connections with the
Bear Lake mail man in the
morning.  We are sorry but hope
she liked them any way.
Love
Lillie

The reception she is referring to is that of my great aunt Rebecca Piggott Gardiner, who was Hazel's daughter.

Amanuensis Monday is an ongoing series created by John Newmark at Transylvanian Dutch.
Posted by Leslie Ann at 2:21 PM 3 comments: Links to this post