Friday's Faces From the Past ~ Unidentified Children 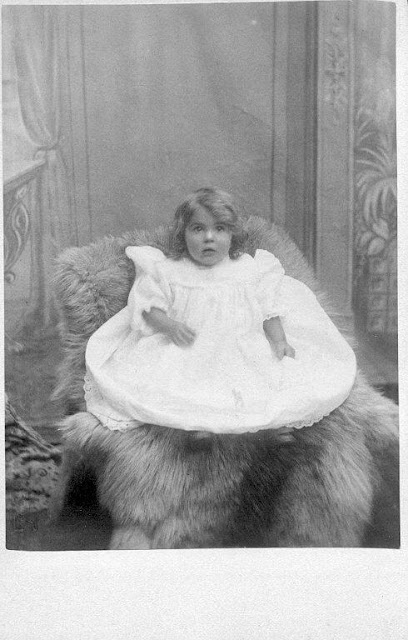 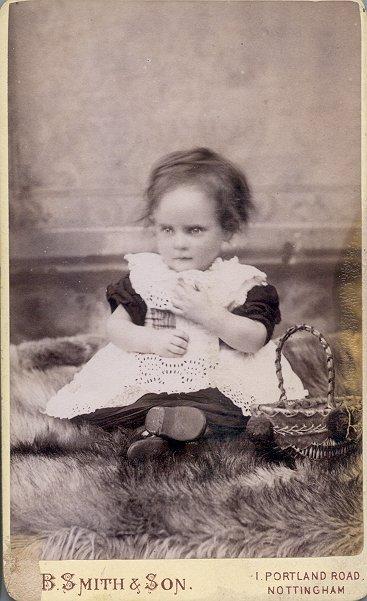 Look at these precious cuties from grandma Nancy's photo album! Not only are these photos unidentified, but I honestly can't tell if they are little girls or little boys.  What do you think?

Email ThisBlogThis!Share to TwitterShare to FacebookShare to Pinterest
Labels: Buck, Friday's Faces From the Past, Stafford, unidentified photo 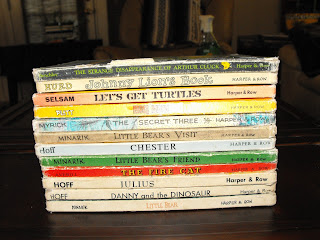 When I was in grade school, probably about third grade, I used to get these I Can
Read books in the mail once a month.  Oh how I looked forward to those books!

I can't remember the order they came in, but I have the following books:


My favorites were the Little Bear books. Little Bear was actually the first of Harper & Row's I Can Read books. 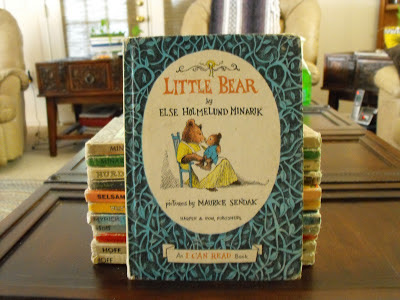 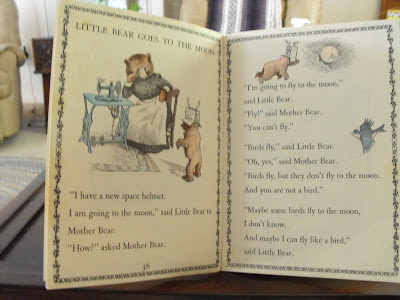 I really love the Illustrations of the Little Bear books.  The artist was Maurice Sendak.

One of these days I will share them with the grandchildren. 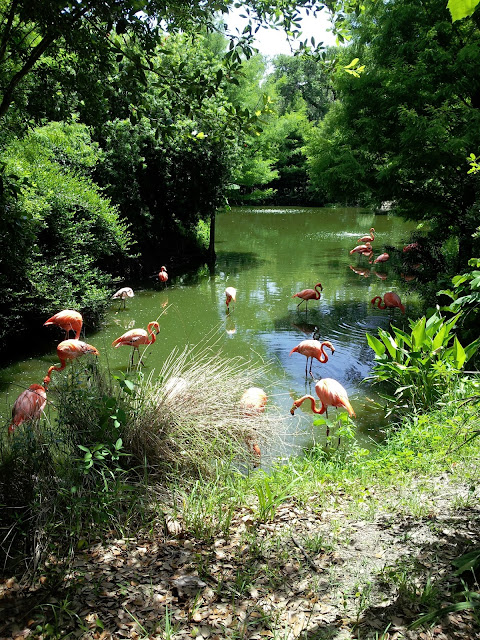 Posted by Leslie Ann at 3:13 PM No comments: Links to this post

Friday's Faces From the Past ~ Unidentified Photo 4 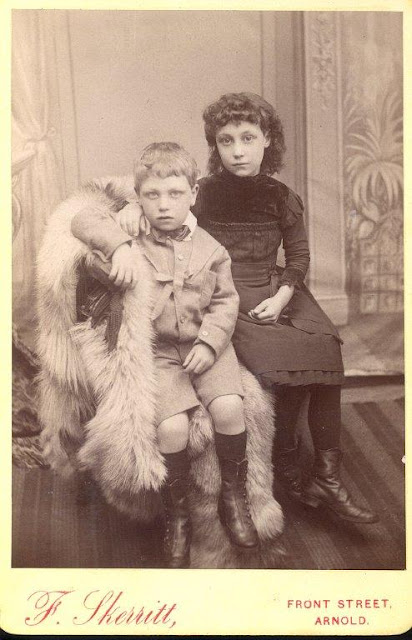 Look at these two little darlings from grandma Nancy's album. I wonder who they are.

The photo was taken by Francis Skerritt. He was listed as a photographer in Arnold as early as 1891.  He was also a hairdresser and a newsagent.

I happened to have found a photo of the building that he sold newspapers from.

Leslie Ann
Posted by Leslie Ann at 5:02 PM No comments: Links to this post

Email ThisBlogThis!Share to TwitterShare to FacebookShare to Pinterest
Labels: Buck, Friday's Faces From the Past, unidentified photo


After finding the land records for George Piggot,  I went through the rest of the New York collections at FamilySearch. In the Letters of administration index 1743-1910 M-R I discovered an entry for George W. Piggot. It was dated Dec 14, 1896 and the administrator was a Theodore W. Handley.

Unfortunately FamilySearch does not have the actual Letter of administration.

This finding really intrigued me. George Piggot, my distilling 4th great-grandfather had a daughter named Phebe Piggott who married Jacob Handley. They had a son named Theodore Wallace Handley born 1833 and died 1838.

I fell in love with this painting when I saw it.  Sure would love to have it.

I can't help but feel that these two are connected somehow to my Piggott family. I have searched high and low online and have not been able to determine who George W.'s parents were. However, I have discovered a few things about him.

His administrator, Theodore Handley was listed as a Pickett in 1860. In 1850 he is listed as a Hanley and is still living with Augusta Pickett. I am going mad trying to figure out the relationship between these three.  Augusta is also a family name.


According to his death notice and the passenger information I found, he was born in Maricaibo, Venezuela, however his passport application says he was born in New York.


George W. Piggott.
George W. Piggott, an artist, died in this city last Sunday of typhoid fever. He was born in Maracaibo in 1852, his mother being a Venezuelan. though his father was of an old New-York Quaker family. He studied art under Walter Shirlaw in New-York and Lefebvre in Paris. and also spent some time in Venice. His best vein lay in portrait painting.

I wonder why he was traveling alone at 7 years old.

I have not been able to find a passenger list for him as an adult, but I am guessing he acquired the passport before he went to Paris to study with Jules Joseph Lefebvre.

George also held several patents for carpet designs. Here are a couple of the designs:


Well, I have had fun learning about George W. Piggot the artist, but I will not rest until I find out who his parents were. Luckily I have the information I need to order his death certificate. I will let you know what I learn from that.


*UPDATE: George W. Piggott, artist is my first cousin 4 times removed! You can learn of my discoveries on the following posts:


Leslie Ann
Posted by Leslie Ann at 11:05 PM 3 comments: Links to this post


The other day I got an email from Mocavo announcing Genealogy Karma that was modeled after Random Acts of Genealogical Kindness. Naturally I checked it out and thought to myself, 'what the heck, I will post a query.'

There's a land record that I have been trying to get a hold of for quite sometime and knew the possibility was slim to none that I would find myself in New York City hanging out at the New York Public Library where this particular record is housed.

All I knew was that Clark K. McAdams was grantee to George & Sarah Piggot in New York City 22 April 1796 which I discovered from here. George and Sarah were my fourth great-grandparents.

So that was my query. I hoped someone could find this record in the library for me. Then I received my answer, a link to the document that was online at FamilySearch! You mean to tell me that I had access to this info the whole time?! Nevertheless, I was excited!

Not only did I find the record I was looking for, but I scoured the images for more and found him listed as grantee for the same property as well as the mortgage papers! He bought the property from a Dr.Samuel Bradhurst May 16, 1795. His mortgage happens to be with the same Clerk Kilby McAdam that he sold the property to on April of 1796. I wonder why he sold the property only after a year?

Below is a transcription of the mortgage.

Registered for and at the Request
of Abraham Skinner Esqr this 19th day of May 1795
Memorandum that on the sixteenth day of May in the year
of our Lord One thousand seven hundred and ninety five. George Pigott of the city of New York Gentleman, did Mortgage to Clerk Kilby McAdam of Islip in Suffolk County and State of New York, All that Certain Dwelling house and two Lots or parcels of ground situate lying and being in the late Outward of the City of New York, now the Sixth Ward of the said City, near the fresh Water Bounded Easterly by ground late of Michael Hufnagel Southerly by ground late of John Kingston. Westerly by lot number One hundred and nineteen lately belonging to the said John Kingston and Northerly by Cross Street. Containing in breadth in front and Rear fifty feet and in length on each side One hundred and fifty feet, Together with all and Singular Vc. (?) Provided always that if the said George Pigott his heirs Executors or Administrators shall pay or Cause to be paid unto the said Clerk Kilby McAdam or to his certain Attorney heirs Executors or Administrators or Assigns the sum of Eight hundred and twenty five pounds Current money of New York on or before the sixteenth day of May which will be in the Year of our Lord One thousand seven hundred and ninety eight, with lawful Interest for the same annually from the Date hereof, According to the Condition of a Certain Bond in the said Mortgage recited then the said Mortgage to be void which Mortgage was proved by the Affidavit of Abraham Skinner one of the Subscribing Witnesses before John Ray the twentieth day of May 1795.

You can bet since I found this new resource I will be looking for other New York ancestors.


Leslie Ann
Posted by Leslie Ann at 4:59 PM 2 comments: Links to this post

Friday's Faces From the Past ~ Unidentified Photo 3 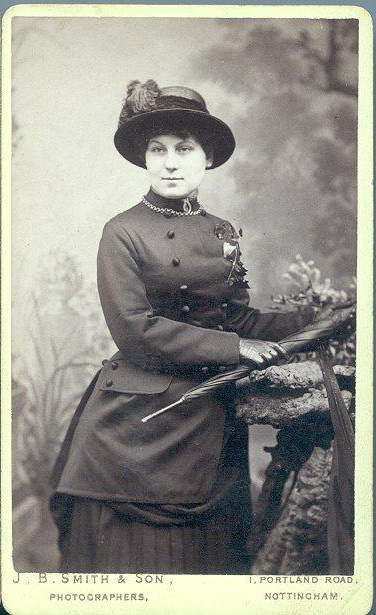 This photo from grandma Nancy's photo album was taken by J. B. Smith & Son in Nottingham. I haven't been able to find much on the photographer.


Leslie Ann
Posted by Leslie Ann at 4:58 PM No comments: Links to this post

Email ThisBlogThis!Share to TwitterShare to FacebookShare to Pinterest
Labels: Buck, Friday's Faces From the Past, Nottinghamshire, unidentified photo 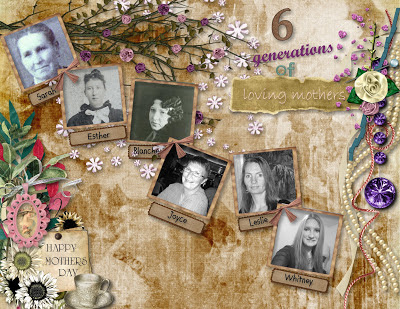 What do you think? Good enough to send to mom?


Leslie Ann
Posted by Leslie Ann at 5:59 PM 2 comments: Links to this post 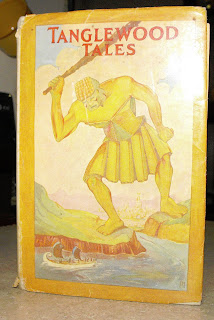 This wonderful book of tall tales belonged to my father. I never did get around to reading it. I'm going to have to remedy that.

When I was a youngster visiting grandma I gathered all the books that belonged to dad and took them home. There is someone on Ebay selling a copy of this book for $34.95.

This particular book was published in 1930 by The Saalfield Publishing Co. It has 13 wonderful illustrations by Fern Bisel Peat, one of which can be seen below. 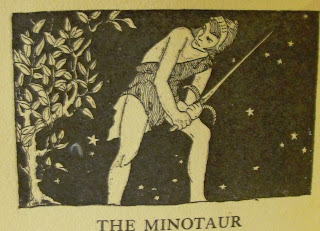 There are six different stories in this book.

This sure would be fun to read to the grandkids. 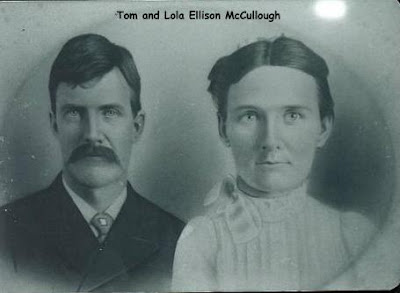 Thomas Monroe McCullough and Anna "Lola" Florence Ellison were the 2nd great-grandparents of my children. I happen to have a copy of their marriage certificate. 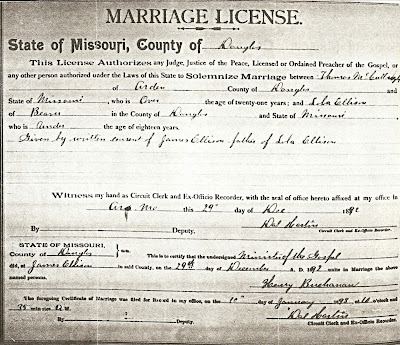 
Thomas and Lola were united in marriage the 29th day of December 1892 by Minister of the Gospel Henry Buchanan.

Below is a photo from their later years. It was photocopied on plain paper years ago so it's not a very good quality photo, but it's all I have.

Leslie Ann
Posted by Leslie Ann at 3:46 PM No comments: Links to this post