This is another letter that was among the second batch of grandma Hazel's stuff. It is from Alfred Bake who is her first cousin once removed. 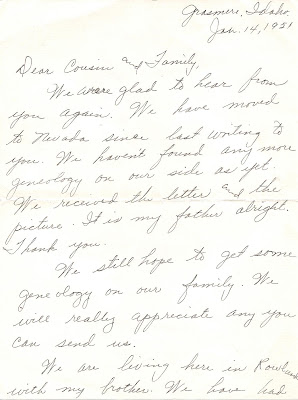 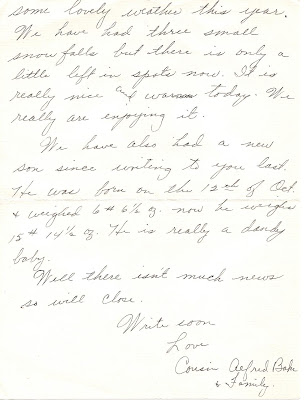 
Dear Cousin and Family,
We were glad to hear from
you again.  We have moved
to Nevada since last writing to
you.  We haven't found any more
genealogy on our side as yet.
We received the letter and the
picture. It is my father alright.
Thank you.
We still hope to get some
genealogy on our family.  We
will really appreciate any you
can send us.
We are living here in Rowland
with my brother.  We have had
some lovely weather this year.
We have had three small
snowfalls but there is only a
little left in spots now.  It is
really ice and warm today.  We
really are enjoying it.
We have also had a new
son since writing to you last.
He was born on the 12th of Oct.
& weighed 6# 6 1/2 oz. now he weighs
15# 14 1/2 oz. He is really a dandy
baby.
Well there isn't much news
so will close.
Write soon
Love
Cousin Alfred Bake
& Family

The other day I sort of stumbled on to the obituary of my 4th great-grandfather, Samuel Henderson. There's not much to it, but at least it exists. I found it through the Utah Digital Newspapers website.

Posted by Leslie Ann at 2:47 PM No comments:

Here is another McLain Will that I found:

Posted by Leslie Ann at 5:49 PM No comments:

So I was doing the genealogy surf on the net and found some new information (love it when that happens). I stumbled on to the McClain Exchange Newsletters and found the transcribed will of Dorcas McComb McLain who is the 6th great-grandmother of my children. It was submitted by a McLain researcher that I used to correspond with back in the old days when I didn't know what the internet was (I need to look her up!)


Among the things she gave and bequeathed were slaves.  This was also new information to me.  I wasn't aware that any of the McLains owned slaves.  So here I am sharing this will in the hopes it will help someone else.


This Will was included in the Volume 5, Number 4 - Winter 1995 issue of the McClain Exchange.  I haven't looked at the other issues yet, better get busy and do that.

If you click on the image, you should be able to read it just fine. However, I will note the names mentioned here. 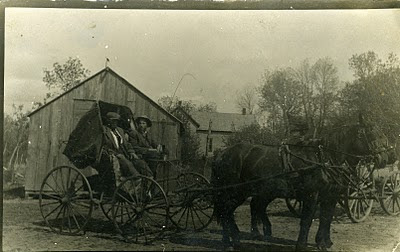 The following copy of Charles E. Taylor's Will was included in the second batch of grandma Hazel's goodies that I received. 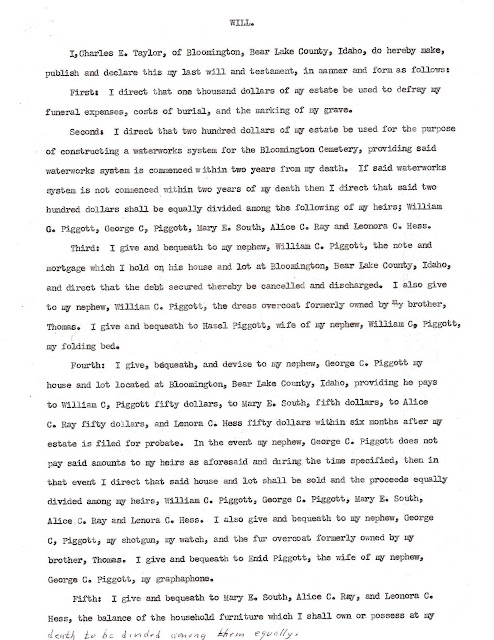 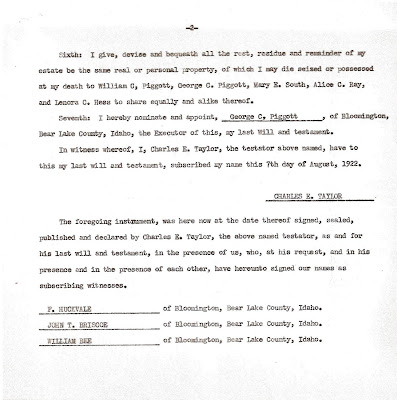 
The foregoing instrument, was here now at the date thereof signed, sealed, published and declared by Charles E. Taylor, the above named testator, as and for his last will and testament, in the presence of us, who, at his request, and in his presence and in the presence of each other, have hereunto signed our names as subscribing witnesses.

Posted by Leslie Ann at 1:10 PM No comments:

Madness Monday - I am a Geni Addict!

I am going absolutely mad!! Geni, I love you, I really do, but you are like a monkey on my back!


Some of you may have noticed (or not)that I haven't been blogging as much. You can blame it all on Geni. Today I finally figured out what it is that keeps me over there merging and pleading with curators to help with what I can't do.


I just can't let all my cousins think that ole gramps belongs to someone else's family.  So I end up staying there until I get the errors corrected (with some sort of documentation, of course)to my satisfaction (and hope it stays fixed).


I especially like it when I can check to see if I am related to some celebrity. That is usually how I find the errors.

The following transcriptions are from the book Rhode Island General Court of Trials 1671-1704, by Jane Fletcher Fiske.


At a Generll Court of Tryalls Held in his Majesties Name at Newport the 22th of October 1679:

[49/51]Upon Indictment by the Genrl Solicetor, against Peter Pylatt a Negro, servant to Christopher Holder of Newport for Asaulting Battering and Ravishing Elizabeth the daughter of said Holder: The said said Peter bing called for and brought into the Court: his Indictment to him Read and he demanded off whither Guilty or not Guilty pleads not Guilty and Referrs himselfe for Tryall to God and the Cuntry.
Jurrymen:


Verdict: guilty: The Court accept the Verdict.
The Courts sentance. That according to law he the said Peter Pylatt Negro shall suffer Death And that he shall from hence be carried to the Goall and there safely secured untill monday next which will be the tenth day of this instant month Novembr, and from the Goale on the said 10th day about two or three of the Clock after noone to be carried to the place of Execution the Gallos, and there to be hangd by the neck untill he be dead Dead. (pg 90)

At the Genrl Court of Tryalls held in his Majestys Name At Newport the 29th of March 1681:

Upon Indictment by the Genrl Aturney against Thomas Joanes of Newport for being an abetter or Reciever of a firkin of Butter ffelloniously taken by a Negro Called Rutter Servant to Mrs Layouge: said Joanes being a prissoner, and brought into Court, his charge to him Read and he askt whether Guilty or not Guilty. Ownes Guilty: the Court doe sentance the said Thomas Joanes to pay the sum of Twenty shillings in mony to the Genrl treasury or soe much in his Service as the Authorety of this Collony shall see cause to Order: and aloe pay Officers ffees (pg 103)

Email ThisBlogThis!Share to TwitterShare to FacebookShare to Pinterest
Labels: Friend of Friends, Negro

Wordless Wednesday - Grandma on the Beach