Amanuensis Monday ~ The Will of Richard Price 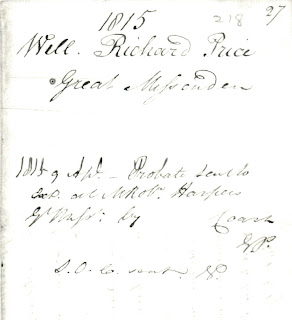 A couple of weeks ago I received a will from England, Buckinghamshire to be exact. If you have ancestors that died in Buckinghamshire, you may want to search here to see if they left a will.

1815 April 8th ----- The Executrix whithin named was Sworn as usual and that the personal Estate of the deceased is under the value of Three Hundred Pounds
Before me
W. Stockins Senr
Proved the 8th day of April 1815 Before the Reverend William Stockins Clerk Surrogate by the oath of Maria Price widow the sole Executrix to whose administration was committed she being first sworn duly to administer

Friday's Faces From the Past ~ Unidentified Photo 6


Here is another unidentified face from grandma Nancy's photo album. 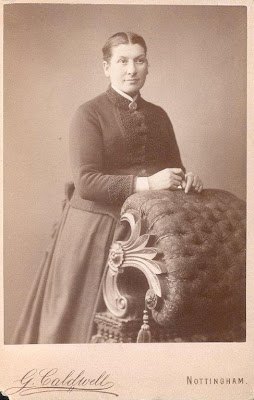 Leslie Ann
Posted by Leslie Ann at 5:08 PM No comments: Links to this post

Email ThisBlogThis!Share to TwitterShare to FacebookShare to Pinterest
Labels: Buck, Friday's Faces From the Past, Stafford, Taylor, unidentified photo

Did You 'Find Photos of your Ancestors'?

As you may have noticed I haven't been posting as much lately. I've been spending a little more time researching and after reading the blog post Find Photos of Your Ancestors  I have been spending more time on FamilySearch.

There was one photo that I didn't have. One photo that I remember from grandma's house and have wondered all these years what happened to it. One of my cousins put it up there. I did a happy dance!

As I looked through my family tree on FamilySearch I noticed that there were photos that other people have tagged to my ancestors, but they did not show up when I clicked that button. I wanted to know why so I asked. This is the answer I got from one of the horse's mouth:


So I wanted to let you all know in case you haven't figured it out, use the Find option to search for your third great-grandparents and beyond. Or better yet, check out the profiles in your family tree.  That is how I found two photos that I never knew existed. I don't think anyone from my branch of the Henderson family knew about these pictures either! So I left a comment to thank whoever posted them.

There were some members of my tree who didn't have photos, so I uploaded them. I also added photos of hubby's ancestors and the x's ancestors. Because that's how I roll. I have uploaded 50 so far.

Leslie Ann
Posted by Leslie Ann at 4:29 PM 2 comments: Links to this post