Simon Price, father of Robert Price, was my 3rd great-grandfather.

When he was young, Simon was apprenticed to a tailor. Upon completion of the apprenticeship he set up his own business in his hometown, Great Missenden.

In the 1841 and 1851 census of Great Missenden, Buckinghamshire, England his occupation was listed as tailor &c. I am assuming the "c" means clothier.

The 1861 Boston, Lincolnshire, England census lists him as a clothier, while the 1871 and 1881 census list him as a retired clothier.

While I was scouring old newspaper archives I was lucky enough to find a couple of ads.

Not only was I able to find these ads, but I found others that indicated he sold other things besides clothing. It turns out that Simon was also a tea agent, and according to the 1844 Pigot & Co directory, he was also a fire insurance agent as well as a tailor.


I guess when you have a shop, you're going to sell what you can, right.

Although gr-great-grandpa Price only did a short stint as a Pawnbroker, It was the profession that brought him to manhood.

About a month before his 15th birthday, Robert Price left his family in Great Missenden, Buckinghamshire, England for London. He was to become an apprentice pawnbroker under Henry Ashman.

The 1851 census finds him in St. Martins, Middlesex, England, 65 Long Acre street, living in the household of Henry Ashman listed as a 15 year old servant pawnbroker.

Robert was released from Mr. Ashman's employ after 3 years. While he started as a stock boy, he must have had a few dealings with customers; maybe just enough to influence his decision to leave the trade. After all, pawnbrokers weren't a very much liked 'lot'.

The following is an excerpt from his biography written by Ezra J. Poulsen:

"...One has but to reflect on the nature of the pawnbroking business to clarify his mind on some of Robert's probable reactions during those years. The banks of that day had not developed to their present status in the small loan field; nor was credit used as widely in a constructive sense as it is today in America. the pawnshop, therefor, was the main contact for those in financial distress; the poor, the improvident, those involved in sudden crises, such as sickness or death. This type of clientele could have had a depressing effect on a sensitive youth like Robert Price.

Pawn brokers were not a popular class. They were probably looked upon as a sort of necessary evil, and often hated by the very people who came to them for help. the risks they took were great; consequently, their rates were high, and their methods sometimes extortionist. The debtor's prison was still a grim reality..."


Ezra claims in his book that Robert eventually went to work for a silversmith, but according to the 1855 passenger list to New York he was still a pawnbroker. The 1860 census of Connecticut however, finds him as a painter. 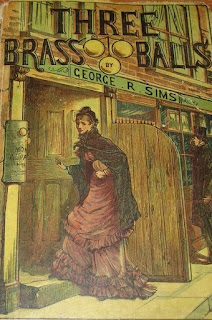 Did you know that there was a pawnbroker's symbol? It is three golden balls. I had no idea.

The illustration on the left is the cover of a book written by George Robert Sims. This story is a narration of some of the customers of pawnbrokers.

Coincidentally, George Sims is the name of another pawnbroker who was an apprentice with Robert under Henry Ashman.

And did you know that the nursery rhyme "Pop Goes the Weasel" comes from pawnbroking?

If you have pawnbrokers in your ancestry, don't forget to check newspaper archives.  Pawnbrokers often found themselves in legal situations for receiving stolen property, most of the time innocently of course. The Old Bailey even found Mr. Ashman as witness to such thievery.

Many victorian writers wrote detailed accounts about pawnbrokers. GoogleBooks would be a good place to start. This awesome page from gr-great-grandpa's lumber business  was included in grandma Hazel's ephemera.


"...William worked in a mill and lumber yard in Salt Lake City.  His knowledge of timber and his ability in mathematics gave him the position of buyer.  He always went to work in a white linen suit, which was starched until it would stand alone.    He measured the logs that were brought to the mill and decided the kind of lumber to be cut from each log and the number of board feet that should be credited to the men delivering the load."

"...William was called by the church authorities to go to Liberty, Idaho and set up a saw  mill to furnish lumber for the people of the Bear Lake area. .....The Piggott family lived in Liberty, Idaho for three years, the William moved the saw mill to Bloomington Canyon and set it up at the foot of Paris Peak."

"The Piggott family had just become well established when William was called to the Leeds Mission in England.  Lumber from the Piggott mill was always in demand because of its high quality and even size.  William leased the mill with the understanding that enough money would be given to Elizabeth to keep the family and to help him on his mission.  He left for England with the feeling that his family was well cared for and that he would receive enough money to carry on his work in the mission field.  He didn't know until he returned twenty-two months later that the incompetent men who leased the mill found that boards one-half inch thick on one end and one-and-half inches thick on the other didn't sell; so they were soon out of business and there was no money to pay for the lease.  The loss of the income from the mill left the family without funds.  They had a cow, chickens, and a garden.  Elizabeth knew that if they were faithful, the Lord would provide for them.  She took in sewing and gave music lessons on her treasured melodeon."

"...He re-established his lumber business, and it was very successful until he felt he was no longer able to work, when he sold the mill."

In 1894 William was among other mill owners in who were arrested by the United States Marshal for "cutting timber on Uncle Sam's dominion". He gave bonds in $1,000 to appear before the United States commissioners for examination.

According to this newspaper article from The Salt Lake Herald, dated September 9, 1890, United States timber agent A. H. Tyner closed the mills and claimed all the lumber as Uncle Sam's. 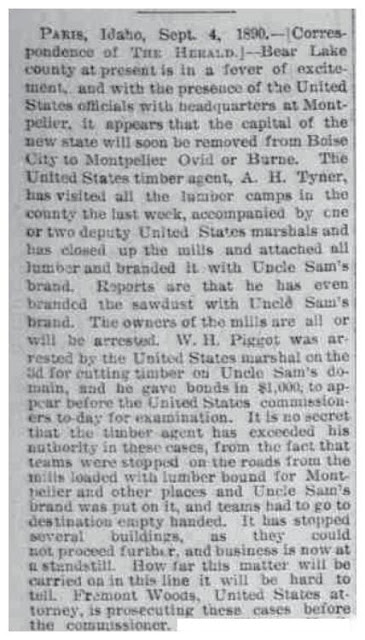 And according to an October 1890 article in the Salt Lake Tribune, Mr. Tyner claimed to have proof that the owners of the sawmills in Bear Lake County were illegally shipping timber out of the territory.

Whether there is any truth to these allegations, I do not know. It would be interesting to know the outcome of these suits.


Thanks to Denise Spurlock for suggesting this prompt.

As you may have noticed, I have been concentrating on my Piggot(t) line. I am trying to piece together the family of my 4th great-grandparents George and Sarah Hull Piggot in the hopes it will lead me to more clues and/or proof that George really was the son of Lord William Pickett.

I have found quite a bit of info regarding Samuel Piggot who is one of their sons.  Samuel was a jeweler in New York City. The above image is his mark that I found on the website Silversmiths and Related Craftsman.

According to some news articles I have found, my poor 3rd great-granduncle had quite a few misfortunes.

The following article is from the New York Tribune dated July 31, 1862. 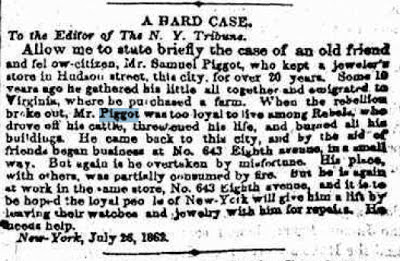 A HARD CASE
To the Editor of The N. Y. Tribune.

Allow me to state briefly the case of an old friend and fellow citizen, Mr. Samuel Piggot, who kept a jeweler's store in Hudson street, this city, for over 20 years. Some 10 years he gathered his little all together and emigrated to Virginia, where he purchased a farm. When the rebellion broke out, Mr. Piggot was too loyal to live among Rebels who drove off his cattle, threatened his life, and burned all his buildings. He came back to this city, and by the aid of friends began business at No. 643 Eighth avenue, and it is to be hoped the loyal people of New York will give him a lift by leaving their watches and jewelry with him for repairs. He needs help.

There is an article in the New York Tribune dated February 7, 1862 that goes into detail in his own words about the terrible treatment Samuel and his wife endured in Virginia. It's a bit lengthy so I haven't transcribed it yet.

I sure hope he got some extra business after this article. I wonder who wrote the letter to the editor. He must have been a swell guy.


I sure was excited last week when I discovered a newspaper ad that indicated my 3rd great-grandfather was a partner in a chair and cabinet making business called Bennett & Piggott.

It was actually this page of the book Harbor and Home: Furniture of Southeastern Massachusetts, 1710-1850 by Brock W. Jobe, Jack O'Brien, Gary R. Sullivan that led me to the newspaper ads that I found.

He was in partnership with Samuel Bennett in the chair and cabinet making business from 1832 to 1833.


The first ad that I found was stating that they were moving their business.

REMOVAL
BENNETT & PIGGOTT have
removed 2 doors South of A. C.
Barney's Apothecary shop on Pur-
chase st. where they intend to carry
on the Chair making and Painting
business in all its various branches.
On hand and for sale a large as-
sortment of Fancy and Winzor
Chairs, which they will sell as low
as can be bought else where. All
orders thankfully received and punc-
tually attended to.

It was August 17, 1833 when they dissolved the partnership.


Notice. - The copartnership hertofore existing under the firm of BENNETT & PIGGOTT, is this day dissolved by mutual consent. SAMUEL BENNETT is duly authorized to settle the business of said firm. August 17, 1833.

Now you know what I am going to be looking for when I go to antique stores!

Leslie Ann
Posted by Leslie Ann at 6:12 PM No comments: