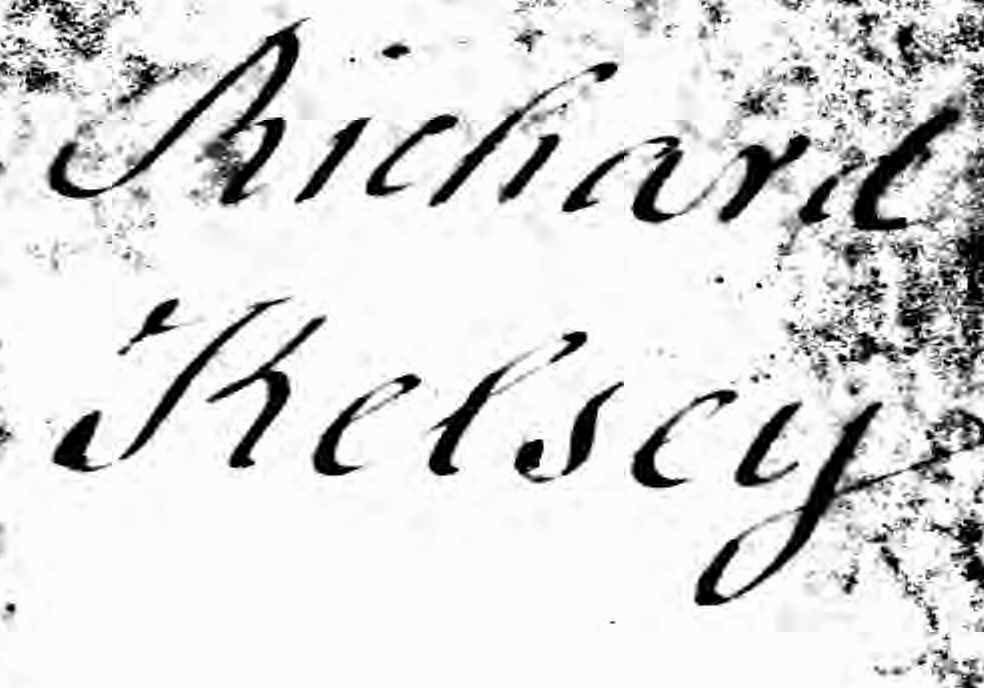 Richard Kelsey is the probable brother to my 5th great-grandfather William Kelsey. I really need more documentation to know for sure. The following will is what caught my attention to the possible connection.


There are a few words I just could not make out, hence the blanks. This will may have supplied a few answers, but of course it has also left me with a few questions.  The nephews and nieces that Richard names, William, Susanna, John, Edward and Elizabeth, were all baptized in Swingfield, Kent, England the children of William and Susannah (my 5th great-grandparents). Well, Susanna, John and Edward's mother is listed as Sarah for some reason. So I am calling my 5th great-grandmother "Sarah Susannah".  Susanna was the oldest born 1751 and Edward was the youngest born 1766.

The thing that puzzles me the most is that he did not mention their brother Richard Kelsey (1756-820) my 4th great-grandfather,  at all. It's most likely that the father William named him Richard after his brother. Did they have a falling out? Curious minds want to know! This seems to be the only Kelsey family in Swingfield at the time.

The witness William Moon was also a bondsman for the marriage of William Kelsey to Ann Gammon Nov 1793 in Swingfield. So I have a feeling that Mr. Moon is connected to them somehow. Coincidentally my Richard's mother-in-law was Elizabeth Moon.


Leslie Ann
Posted by Leslie Ann at 3:53 PM No comments:

Leslie Ann
Posted by Leslie Ann at 6:27 PM No comments: 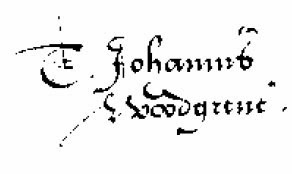 John Woodgreene, the elder, is my probable 11th great-grandfather. I say "probable" because I would like a little bit more evidence. I have obtained his will through The National Archives UK and here is my attempt at transcription (I started to get a migraine trying to decipher a few words so I just drew blanks!):


In the name of god Amen the twentith daye of September 1 thousand five hundred and nintie five I John Woodgreene thelder of Higham in the countie of Kent yeoman beyng sick of bodie but of good and perfect memory thanks be given unto Almighty god I Do make and ordaine my last will and testament in manner and forme following First I bequeath my soul unto the hands of Almightie god my maker and Redeemer hoping by the Deathe and passion of Lord and savyoure Jesus christ to be saved and my body to be buryed in the churchyard of higham afore sayed : Item I give and bequeath unto my Daughter Johane Woodgreene ___ pounds of lawfull money of England to be payed unto her by my Executors at the daye of her marriage or at her age of one and twentie years which of them shall first happen. Item I give and bequeathe unto my Daughter Agnes Woodgreene _______ pounds of ___ like lawfull money to be paid unto her at her daye of marriage or age of one and twenty years as aforesayed. Item I do give and bequeathe unto Elizabeth Lambe daughter unto my sonne in lawe Lambe twentie Shillings of like money. Item I do give unto the ____ ___ which shall cary my bodie to churche eighte pence apiece. Item I do give and bequeathe unto my sonne John Woodgreene all ___ somme and sommes of money as are due and owing unto me by my sonne Lambe in as simple manner as I might have had and ____ the Same; And all my lands tenements and hereditaments lying and beying in the parishe of howe als hoo in the countie of Kent which I lately purchased of my sayed sonne Lambe to have to hym and to his heyers for __ uppon suche conditions as I hould the same except one ___ tenement with the appurtenance which now is in the tenure or occupation of James Bonham or his assigns Item I do give and bequeathe unto my sonne william woodgreene and to his heyirs for ever all that my like messauges or tenement with the appurtenance in the sayed parish of howe ___ in the tenure or occupation of James Bonham or his assignes. All the residue of my goodes unbequeaathed (my debts and legacys payed and performed I do give and bequeathe unto my beloved wife Margaret woodgreene and unto the sayed John woodgreene my sonne ____ I do make constitute and appoynte my full and equal Executors of this my last will and testament. And I do desire my loving friendes Robert Miller of Higham and William Pate of ffrindsburye to be my overseers to see this my last will performed as my trust is in them Item, my will is that my sonnes John and william and Johane my daughter shall not demand any legacys which were given to them by the will of theire grandfather, Allso my will is that my said executors shall within one yere after my decease enter into band unto my Sayed overseers to see that my last will and testament performed in all thinges according to the same _____ thereof John woodgreene in the presence of Richard wilkenson and william Pate


Leslie Ann
Posted by Leslie Ann at 5:32 PM No comments:


This is the last copy I have from the  green photo album that belonged to William Taylor.

I am assuming that this cute little girl is wearing her Easter bonnet and holding her Easter basket. I wonder if she just found an Easter egg in that little bush.

Email ThisBlogThis!Share to TwitterShare to FacebookShare to Pinterest
Labels: Friday's Faces From the Past, Stafford, Taylor, unidentified photo

John Stanners was my 4th great-grandfather. He was a Plaisterer by trade, but he also dabbled in lime burning. According to uncle Ezra he was also a builder.  The following excerpt is from his book, Robert Price, which can now be found online at FamilySearch Books:


"...Mary Louisa Stanners, the youngest child of a highly respected Scotch lowland family. Her father, William Stanners, also resided in Great Missenden, where he operated his own business as a builder and plasterer. He owned the kiln in which he made the brick he used, and was known as an upright tradesman, who served his country by good work with the best material. William Stanners and his wife, Susannah Taylor, had three daughters and two sons, the latter following him in his business. His success and good standing is evident by the fact that he built a pretty villa on the slope of the Chiltern Hills, famous for their beautiful beech woods. He lived in his home until his death at the age of seventy-five."


I haven't figured out why Ezra refers to John as "William", but it is documented that Mary Loiusa Stanners' father was John Stanners. I haven't found any documents labeling him as a builder either.

I was able to find him in the Pigot's 1830 Directory as a lime burner.

He is listed as a plaisterer in the following documents:
...and just the other day I found out that he was an insolvent debtor in 1821.

I sure would like to know the rest of the story.

In case you didn't know, a plaisterer (plasterer) is a tradesman who works with plaster, such as forming a layer of plaster on an interior wall or plaster decorative moldings on ceilings or walls. Said plaster was made of lime, aggregate, fiber, and water until the end of the 19th century.

I sure would like to be able to access the London Apprenticeship Abstracts 1442-1850 at Origins.net to see if and when he apprenticed, but alas, no.

Leslie Ann
Posted by Leslie Ann at 3:14 PM No comments: