Posted by Leslie Ann at 9:56 AM No comments:

The Transcription of a Will 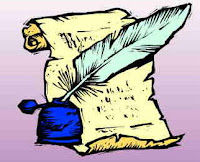 Transcribing a will can be both overwhelming and rewarding.  Overwhelming because at first glance it may look like a bunch of gobbledygook.  Rewarding because when you are done you may have discovered valuable information.

If you are a palaeographer, transcribing a will is probably a walk in the park for you. And it helps if you are savvy with legal lingo.  But, if you are anything like me, you need all the help you can get.

I transcribed my first two wills with a notebook and a pen while sprawled out on the couch.  It can take up to five minutes just to figure out one word, so  I prefer to be comfortable instead of staring at the computer screen.  Of course I had my Blackberry nearby. The Dictionary.com app really came in handy.  If it weren't for this app, I would still be stuck on the word charnell.  And I would be lost without my book Genealogical Research in England and Wales, Vol. III.  I still prefer a good ole page turner.  This book is available through Worldcat and amazon.com.

I found this software called Transcript that I will probably use for the next will that I transcribe.  That will eliminate the step of transcribing from the notebook to the computer.   To work with PDF files you will also have to download Ghostscript.

This software allows you to transcribe without having to switch between your document and your word processor. 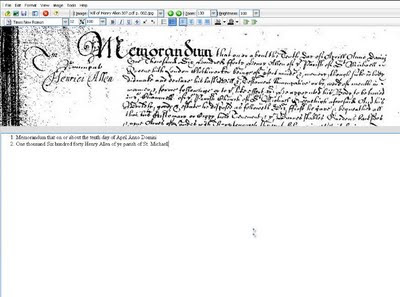 *Update -  I have transcribed a few things with this software since the original writing of this post and let me tell you it saves so much time.  If you have not downloaded this software yet, what are you waiting for?


The following links will be very helpful in guiding you through the transcription of any old document.
Here is a sampling of 17th century letters:

I still have four more wills to transcribe.  Wish me luck!
Good luck on your next transcription project and may it be fruitful! 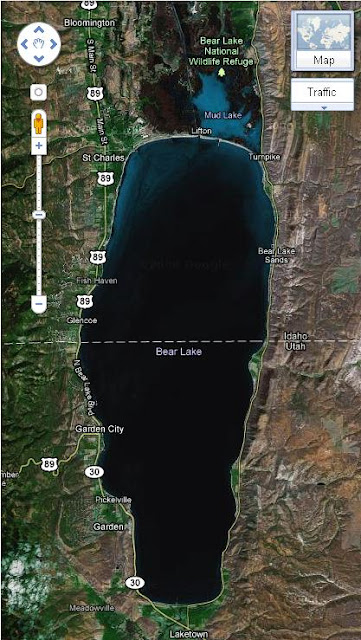 My favorite body of water is Bear Lake.  It has been called the "Caribbean of the Rockies" for it's turquoise-blue colors.  I have seen it three different colors of blue at one time. It's the most beautiful lake I have ever seen!

It's a natural fresh water lake and lies on the border of Idaho and Utah.  I remember several occasions when I pleaded with dad to drive around the lake.  We didn't get to do it very often.  You can bet that when I started driving to Bear Lake myself I drove around it plenty of times.


We would start on US Hwy 89 driving through St. Charles, Idaho following the highway through Fish Haven, Idaho. Then follow Utah State Hwy 30 through Garden City, Pickleville, Laketown.  Then hang a left off of the Hwy to drive along the east side of the lake.  We then come out at the North Beach in St. Charles, Idaho.  That is the beach we always went to when we were kids.

On the east side is where there are some nice beach houses and condos.  Merlin Olsen had a home on the lake.  On the Idaho side there are campgrounds along the east beach. The marina and resorts are in Garden City.

Have you heard about the legend of the "Bear Lake Monster"? Yes, he has quite a reputation. I never have seen him though.

It was always a treat to go to the lake when we were visiting with the grandparents.  When we were kids some of the Poulsen family reunions were held at Ted and Vilate  Poulsen's summer home on the lake in Fish Haven.  Ted was my first cousin once removed and grandma Smedley's nephew.  Ted's descendants still spend summers there on the lake.  Aunt Cloree lives in a house right across the street.  There is an awesome view of the lake from her front yard.

In 1996 hubby and I spent our first camping trip together (before he was my hubby) at Bear Lake.  We camped on the east side in Idaho at a little campground.  There's  nothing like sleeping out under the stars!

Have you heard of the little old lady that lived in a shoe?  Well if you keep going past the campground, on your left before you get to North Beach you will see her house.  Really, it's there.  I have a picture. 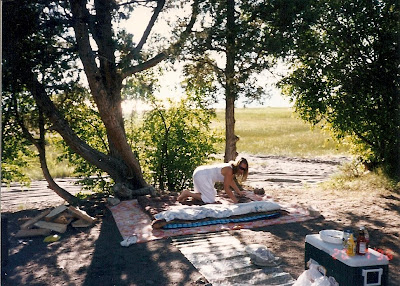 Thanks to Amy Coffin at We Tree for coming up with this series.

Posted by Leslie Ann at 4:56 PM No comments:

Obtaining Documents From the U.K

I did it! I was finally able to purchase online documents from The National Archives!

If you read Genealogy Lessons Learned the Hard Way, you probably noticed my frustration in accomplishing this goal.

And if you're anything like me, you WILL NOT purchase anything online with your bankcard. I usually use the Vanilla Visa Gift for this purpose.  But guess what, it is only valid in the United States.  I didn't know what to do.  I really NEEDED these documents (not like I was jonesin' or anything) to help climb over a brick wall.

So I went back to the Dollar General and looked through all their gift cards and such.  I was thinking about getting their re-loadable debit card, but their system was down and I couldn't have purchased it anyway.  The clerk was kind enough to tell me that the Travel Centers of America up the street had cards, so off I went.

Jackpot! I found the perfect card. A Visa Gift card offered by nFinanSe, accepted anywhere in the world that takes Visa.

I dare say I have a lot of transcribing to do.