Posted by Leslie Ann at 4:35 PM No comments: 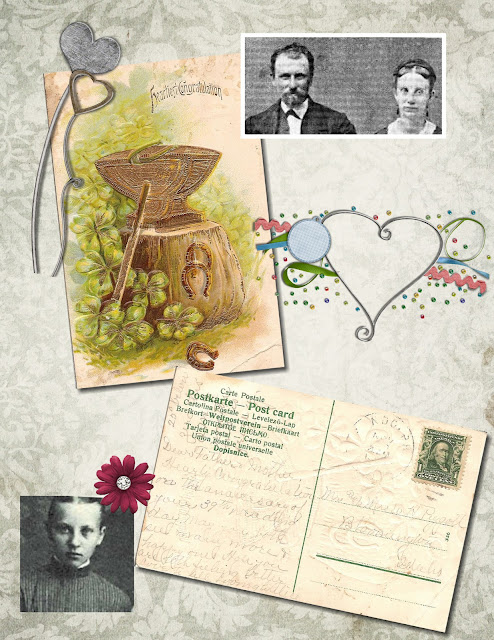 This postcard comes from grandma Hazel's box of goodies and was written to my great-great grandma & grandpa Piggott from their daughter Alice.  She was my great-grandaunt.

Unfortunately I can't read the postal stamp, but the card must have been written and sent some time around Nov 1908, since their 39th anniversary was Dec 1, 1908.

Dear Father & Mother,
Hearty congratulations
on the anaversary of
your 39th wedding
day. May you both
see many more &
happy ones. Hope you
are both feeling better.
Love to all Lovingly Alice


There is a little something more written up above over the green postcard print. This is my attempt to decipher it:

Let me know if you can make it out.

Amanuensis Monday is an ongoing series created by John Newmark at Transylvanian Dutch
Posted by Leslie Ann at 6:27 PM 2 comments:


PIGGOTT-- On Saturday evening, Aug 6, AUGUSTA PIGGOTT.The relatives and friends of the family are respectfully invited to attend her funeral, from the Meeting-House, Milton, Ulster County, N. Y., on Tuesday, Aug. 9, at 10 o'clock A. M.

Augusta Piggott was my 3rd great-grandaunt. She never married.

Do you ever reminisce about your childhood when you're just sitting there with your cup of coffee? Or maybe a song on the radio reminds you of something from your past.  Then there are those pleasant aromas that take you back somewhere else. Or maybe you're just feeling gushy and delve into your memories.  That's all me. You're probably wondering what all this has to do with cb radios. Well, I'll tell you.

I've decided to start a series called Reminiscing. Sort of installments of my personal history or my memoirs for the descendants. So when ever I am in a reminiscing mood, you will hear about it.  Guess what I was reminiscing about?

My handle was Street Singer. I met my first serious boyfriend on the cb in 1978. His handle was Caveman.  "Breaker,breaker. Caveman, are you by (the radio)?" He drove a mustang.  It was sweet!

Me and my best friend Jeep Freak used to spend hours in our parents vehicles talking on the cb when they would let us. And then I was caught talking on Rob & Karen's cb when I was babysitting for them.  They were out with my mom and dad. Let's just say that didn't go to well.

So I have this list of all the people I used to talk with on the cb. I knew most of their real names. There were nine that I didn't know. And yes they were all boys. Except for the first 3. Those were girlfriends.


What was your cb handle?

This is Street Singer KNZ22, singing off. We gone.

Posted by Leslie Ann at 1:47 PM No comments:

Email ThisBlogThis!Share to TwitterShare to FacebookShare to Pinterest
Labels: Reminiscing 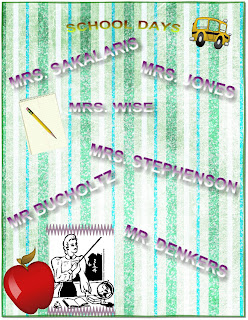 I had a few favorite teachers from my school days. Not because they inspired me or anything. I hated school!  They were my favorite because they were cool, fun, or didn't put me to sleep. My favorite subject was choir and lunch time.  I loved school lunches especially on Friday. Pizza and peanut butter squares - yum!


My first grade teacher in 1968 was Mrs. Sakalaris at Jefferson elementary. She wore one of those Beehive hairdos. At the end of each school day she would sit at the piano and play, what I call "The Goodbye Song".  The whole class would sing along.... "Goodbye school, goodbye teacher, goodbye desk, (etc..), it's time to say goodbye!" It was fun. We loved it.


My second grade teacher was Mrs. Jones.  I remember a day in her class around Thanksgiving time.  She wrote the first sentence of a Thanksgiving story on the board and we were to  write the rest of the story in our notebooks.  I got an outstanding grade on mine.  I will never forget when I showed it to dad. He never believed that I wrote it! I was proud of that story and daddy never believed that I wrote it on my own.  Broke my heart.


I think Mrs. Wise was my most favorite teacher of all.  She was my 3rd grade teacher.  One day for show and tell I took my glass collection.  Little pieces of glass. Brown ones, blue ones, green ones and any other color I could find. I used to wash them in the sink.  For some reason mom and dad didn't like the idea of me playing with glass (really?) so they made me get rid of it.  I was mad.  The very next day I went to school Mrs. Wise gave me some sandpaper for my collection so I could smooth them out. I thought that was the coolest thing! Then I felt really sad cause she had gone to that trouble for me and mom and dad made me throw them all away!


Mrs. Stephenson was my 4th grade teacher.  She reminded me of my grandma.  I loved story time when she  read Charlotte's Webb to us.


Well, then there was Mr. Bucholtz.  He was my government teacher when I was a senior.  Unfortunately I wasn't lucky enough to get him the first semester.  I had to settle for the girl's basketball coach.  I kid you  not, I fell asleep in his class every day. He was a jock.  Need I say more?

Thanks to Amy Coffin at We Tree for coming up with this series.
Posted by Leslie Ann at 5:47 PM No comments:

Email ThisBlogThis!Share to TwitterShare to FacebookShare to Pinterest
Labels: 52 Weeks of Personal Genealogy 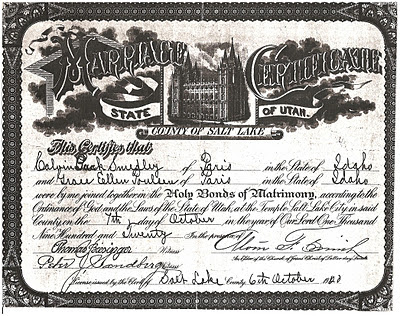 This is a copy of the marriage certificate for my paternal grandparents. Grandma sent it to me years ago when I was still a teenager (wouldn't want to do that again).  She was always good at sending me stuff like this and I didn't even have to ask.
She even made sure that all three of us kids had a Book of Remembrance and it was full of Smedley and Poulsen related pedigree sheets and family histories. 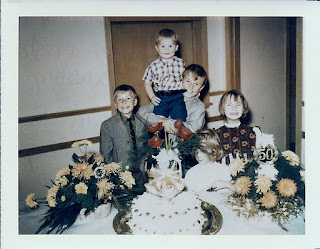 This photo was taken at their 50th wedding anniversary in 1970.  I will let you guess which one is me.

Friday is 91st anniversary of their wedding.

This newspaper article about their 60th wedding anniversary has been sitting in my Book of Remembrance for years.  Unfortunately I don't remember how I came to have it. Did I cut it out? Did grandma send it to me, or did mom cut it out?  Did it come from the Idaho State Journal? Or maybe the Paris Post?


Below is the napkin that I brought home from the 60th anniversary party. 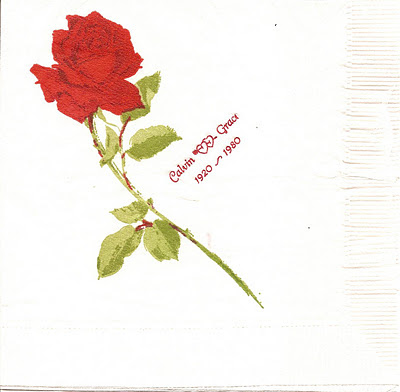 Forty-five years to go for me and hubby!

Amanuensis Monday - Will of Thomas Teddeman

Yea! I was able to find a brother for 8 great-grandpa Tiddeman! It was by sheer luck.  I searched the National Archives UK for Tiddeman, Teddeman, etc., and found a will for Thomas Teddeman, Mariner of Dover, Kent dated 1675.  I felt pretty sure he would be related somehow, but I had no idea that this Thomas was my 8th great-granduncle!

What's really sweet is that he named grandpa Edmond as his Executor.  He must have died young with no issue because he mentioned no children or wife, and left everything to his nieces and nephews.

Posted by Leslie Ann at 2:13 PM No comments: