I am not going to share the whole history at this time because it includes some erroneous information; and I have discovered so much more about him since then.  Eventually I will write a new history about him, but right now I would like to share the news article extractions that she included. 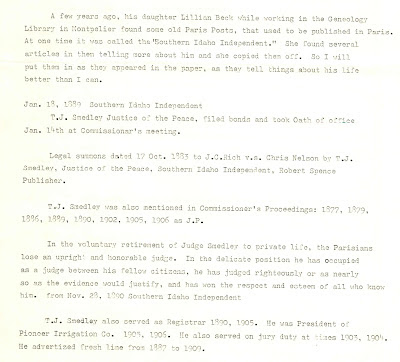 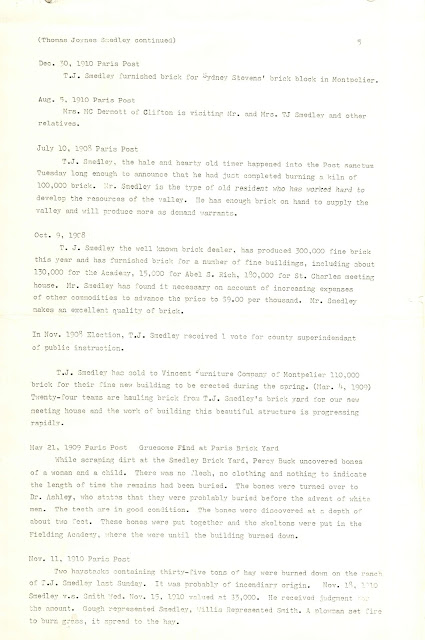 A few years ago, his daughter Lillian Beck while working in the Geneology Library in Montpelier found some old Paris Posts, that used to be published in Paris. At one time it was called the "Southern Idaho Independent." She found several articles in them telling more about him and she copied them off.  So I will put them in as they appeared in the paper, as they tell things about his life better than I can.

In the voluntary retirement of Judge Smedley to private life , the Parisians lose an upright and honorable Judge. In the delicate position he has occupied as a judge between his fellow citizens, he has judged righteously or as nearly so as the evidence would justify, and has won the respect and esteem of all who know him. From Nov. 28, 1890 Southern Idaho Independent

July 10, 1908 Paris Post
T.J. Smedley , the hale and hearty old timer happened into the Post Sanctum Tuesday long enough to announce that he had just completed burning a kiln of 100,000 bricks. Mr Smedley is the type of old resident who has worked hard to develop the resources of the valley. He has enough brick on hand to supply the valley and will produce more as demand warrants.

Oct. 9, 1908
T.J. Smedley, the well known brick dealer has produced 300,000 fine brick this year and has furnished brick for a number of fine buildings including about 130,000 for the Academy, 15,000 for Abel S. Rich, 180, 000 for St. Charles Meeting House and about 45,000 for the Bern School House. Mr. Smedley has found it necessary on account of increasing expenses of other commodities to advance the price to $9.00 per thousand. Mr. Smedley makes an excellent quality of brick.

T.J. Smedley has sold to Vincent Furniture Company of Montpelier 110, 000 brick for their fine new building to be erected during the spring ( Mar. 4, 1909) Twenty four teams are hauling brick from T.J. Smedley's brick yard . For our new meeting house and the work work of building this beautiful structure is progressing rapidly.

May 21, 1909 Paris Post   Gruesome Find at Paris Brick Yard
While scraping dirt at the Smedley Brick Yard , Percy Buck uncovered bones of a woman and a child . There was no flesh , no clothing and nothing to indicate the length of time the remains had been buried. The bones were turned over to Dr. Ashley, who stated that they were probably buried before the advent of white men. The teeth are in good condition. The bones were discovered at a depth of about two feet.

Nov. 11, 1910 Paris Post
Two haystacks containing thirty five tons of hay were burned down on the ranch of T.J. Smedley last Sunday. It was probably of incendiary origins.